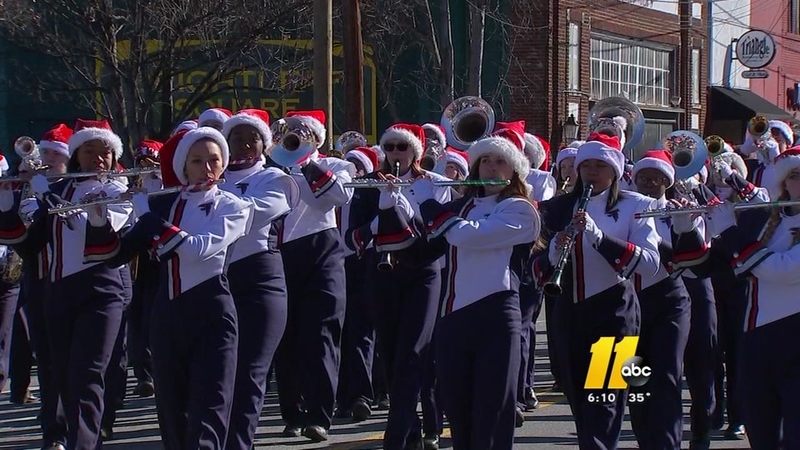 This year's route is much different from the one for the sparsely attended 2008 parade. Since then, business and residential growth in Durham's downtown has surged.

Among the happy people we spotted were people like Valerie Harris, who didn't mind the big chill in the air.

"I love the cold weather! It's crisp," said Harris.

These kids say, "Put me on @ABC11_WTVD !" We're having fun at the Durham Holiday Parade. 🎄 pic.twitter.com/RA7DIM5IMZ

Telaneui Woods occupies the opposite camp, and declared "I can tell you what the worst thing is. Cold!" She did, however, say the festivities were worth the discomfort.

Elizabeth Jenista has lived in Durham for a decade but experienced her very first holiday parade on Saturday. She's from California, and not a cold weather fan

"There are not enough hand warmers to keep us all warm!" she told ABC11.

Parade fans got a good show, though, with big trucks from the city's public works department rolling down the street with horns blasting occasionally.

Marching bands from the city's public high schools and charter schools followed, along with women who play sports for Duke. The parade, coincidentally, ended on East Campus.

While taking it all in at the staging area across from the Durham County Health Department, young parade fan Samara Williams smiled while telling us "It's pretty big!"

"It's been a while! Been a while, glad to be back," said Santa. "Yeah, we need to thank Mr. Bill Bell for bringing us back, and bringing the parade back to Durham."

A smiling Mayor Bell served as parade marshal, leading the participants through downtown while waving to the people lining the road. Our ABC11 team was well represented by John Clark, Barbara Gibbs, Diane Wilson, Joel Brown and DeJuan Hoggard, who came with his wife and baby daughter.

While everyone was bundled up, Mrs. Claus told us: "It's almost like summer in the North Pole here!"

But the parade brought warm feelings back to the Bull Citizens, who left with big smiles and plenty of pleasant memories.

A cruise down Main Street on the #ABC11 float for the #DurhamHolidayParade 🎄❄️ pic.twitter.com/jctIVIEEKt

The view from the #ABC11 float at the #DurhamHolidayParade! Nice crowd! pic.twitter.com/D2828jANGT