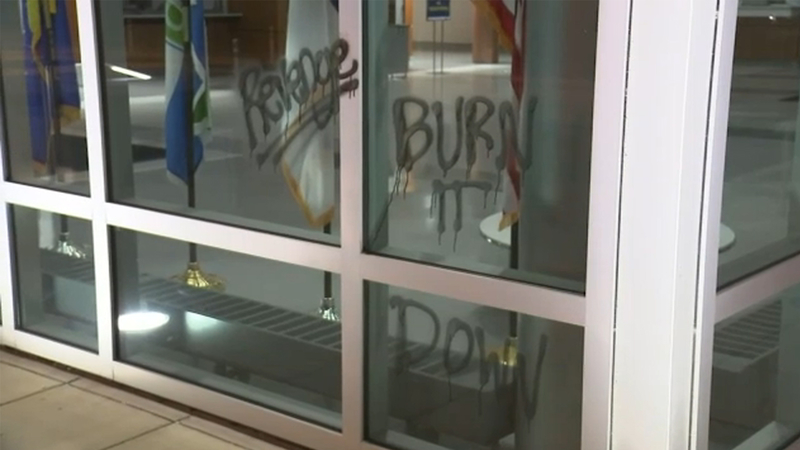 DURHAM, N.C. (WTVD) -- Durham Mayor Steve Schewel on Thursday condemned the vandalism that took place downtown the night before while voicing full support behind the spirit of the Breonna Taylor protests nationwide.

Schewel said police received reports of 13 instances of vandalism from Wednesday night's events downtown, which resulted in storefronts shattered and trash cans scattered along the street. A church was also damaged and derogatory messages were spraypainted on police headquarters. In a Zoom meeting with local media and Durham Police Chief C.J. Davis, Schewel expressed empathy for legitimate protesters and said their efforts were hi-jacked by a group of about 60 to 75 that showed up with different agenda.

"This is not something that we can accept and we cannot accept it," Schewel said. "They damaged at least 13 buildings, damaged windows and did tens of thousands of dollars of damage to businesses, to a church. It is something we cannot accept."

"People who inflicting the damage last night are not advancing the calls to justice, in fact what they are doing is co-opting this movement for racial justice for their own purposes."

"The folks that were inflicting the damage last night were white," Schewel said. "I want to be really clear about this. I believe that is an indication of the fact that this is an attempt to co-opt a racial justice group. This is not something we can accept."

Davis said the department is taking a non-confrontational stance on all protests, which have been common in Durham since the George Floyd death in May. However, most of those protests have been peaceful.

The department is reviewing security video for clues to find those responsible for the damage caused Wednesday night.

Davis said she wasn't exactly sure who the group was but said they matched characteristics of an anarchist group.

Mayor Schewel supported the police department's stance. Davis told reporters that DPD didn't have prior knowledge of the protests and they plan to increase their presence "so that residents know we are there."

"Last night caught us by surprise," Davis said. "Unfortunately we will have to be more visual as far as our presence until we get past this current climate."

Schewel said there are no plans to implement a curfew at this time.

Durham activist, Paul Scott, a loud voice in Durham's Black nationalist community, condemned the violence of the night saying that the largely white group hijacked the tragedy to settle political scores with the White House.