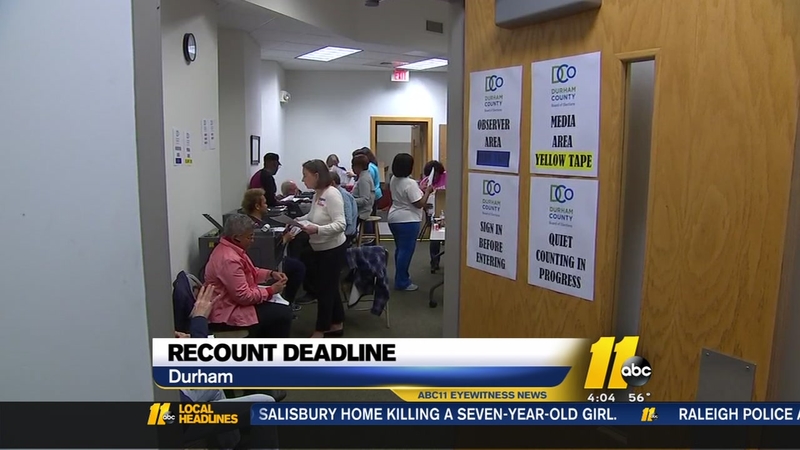 DURHAM (WTVD) -- The recount of 94,000 ballots ended in Durham County ended around 2 p.m., about two hours after Gov. McCrory conceded the race to challenger Roy Cooper.

The results of the recount were nearly identical to the original tally -- less than 10 votes changed, according to election staff. Roy Cooper netted 6 votes and Pat McCrory's count stayed the same, officials told ABC11.

The results are being certified and will be sent to state officials.

The elections board, with help from paid volunteers, started work Saturday morning and continued through the weekend to meet a Monday evening deadline set by the State Board of Elections.

By the end of Sunday night, around 53,000 votes had been counted.

ABC11 spoke to the election chair, Bill Brian, in Durham after McCrory conceded.

"I don't really have a reaction to the governor's concession," Brian said. "We were ordered to recount the ballots and so we are recounting the ballots."

The total process is expected to cost taxpayers around $35,000.

The recount was ordered after some technical issues on election night led to the late uploading of numbers that put Democrat Roy Cooper up over Republican Gov. Pat McCrory by about 5,000 votes.

Cooper leads McCrory by around 10,250 votes.