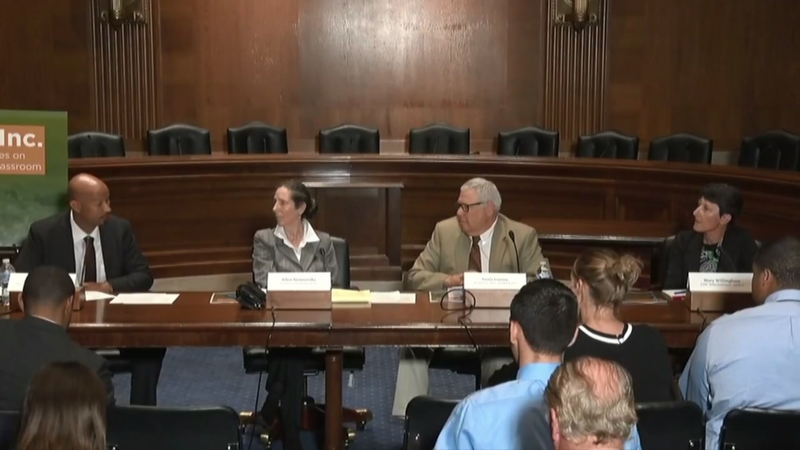 Thursday's forum on Capitol Hill was not solely about UNC, but the woman who blew the whistle on the academic scandal here was hailed as a hero for shining a huge spotlight on what one U.S. senator is calling a civil rights crisis.

Far from the hot glare she once faced in Chapel Hill, Mary Willingham now teaches Chicago middle schoolers to read. On Capitol Hill, she shared the irony of her current job and the one she had at Carolina.

"I teach middle school students to read now. It's the joy of my life," she told the crowd. "When I went to the University of North Carolina as a learning specialist, I didn't expect to have to teach kids to read, because those kids were a lot older."

The woman who helped blow the whistle on the academic fraud scandal at UNC was hailed as a hero on Capitol Hill Thursday at a forum on whether athletic scholarship players are being cheated academically and financially. #abc11 pic.twitter.com/88xOnRWy00

Willingham helped lift the veil on a two-decade old system of bogus classes for UNC athletes. At the forum she shared story after story of Carolina players, young men and women, she tutored, admitted to UNC on athletic scholarships but who couldn't read letters, who were unable to write a sentence.

"One of my students that comes to mind wanted to be a business major. She needed to learn to read first. She needed glasses first. That was a problem for the NCAA because it was something that they might not provide," Willingham said.

In his newly-released report, 'Madness Inc.,' Connecticut Sen. Chris Murphy detailed what he sees as the exploitation in major college sports. He's lobbying to compensate players financially in what he cites as a $14 billion industry where major schools operate like the pros but for economic reasons refer to the workers as amateurs.

The NCAA says its "rules prioritize both academics and athletics ... Allowing student-athletes to be paid for athletics performance would undermine the balance between the two."

But at the forum in Washington panelists argued the current system of paying players with an education rather than cash simply cheats them twice.