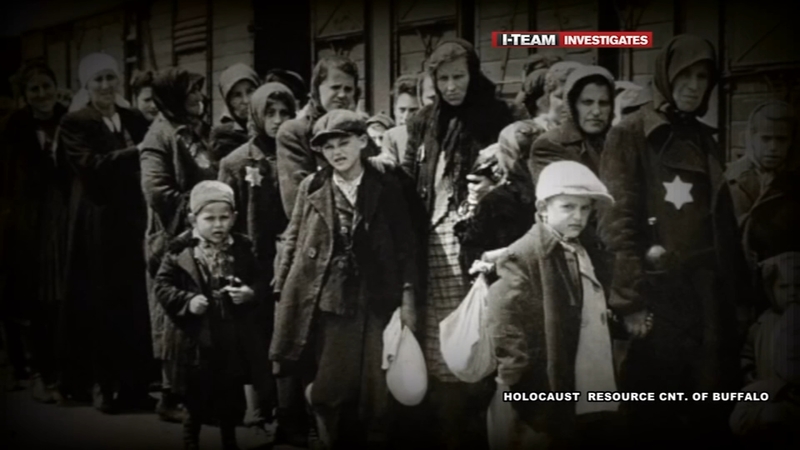 RALEIGH, N.C. (WTVD) -- As the world marks International Holocaust Remembrance Day, teachers in North Carolina continue to grapple with how to teach the next generation about the most infamous event in human history.

"They have an idea of what it's about," David Beller, a Raleigh high school teacher, told ABC11 of the "normal" student experience. "They probably did something maybe with Anne Frank in middle school, maybe they read Night, but that's probably the extent of their education of the Holocaust, unless they're history buffs and they've done their own thing and their own research."

Many, if not most, or even all North Carolina middle schools and high schools teach about the Holocaust in some way, shape or form. The Department of Public Instruction also provides resources to teachers and has organized a North Carolina Council on the Holocaust.

"They do things like, 'Don't teach or imply that the Holocaust was inevitable,'" Beller explained. "Avoid simple answers to complex questions, and so if you come away with more questions than you had coming in, that's a good thing, especially when we're looking at it at the depth that we're going to cover it."

Eighth grade social studies teacher Corey Barringer said he can't tell his students what to think, but he teaches the Holocaust in a way that makes them think about their roles in history.

As for primary sourced materials, Beller and his colleagues continue to lose perhaps their most valuable resource: survivors.

"The whole unit on the Holocaust is posed around this question of how does learning about the choices people made throughout history help us understand the power and impact of our choices in the world today," Beller said.

For decades, many survivors living in North Carolina visited middle and high schools, but the number of survivors still living and able to tell their stories is dwindling: Zev Harel, and cousins Rachel Kizhnerman and Shelly Weiner, among others.

Abe Piasek, among the most prominent and popular speakers in the Triangle, died last year at the age of 91. ABC11, in fact, spoke with Piasek in 2018 to mark 80 years since Kristallnacht, the night many historians consider the start of the Holocaust.

Other N.C. survivors who passed in recent years include Hank Brodt, Morris Glass, Dr. Susan Eckstein Cernyak-Spatz, Gizella Abramson, Simone Lipman, Walter Falk, and Jack Hoffman among others.
"It's not just about learning about history," Beller added. "It's about taking that knowledge and having a sense of civic agency and doing something with it in your community afterward. So follow-up questions can be, how can making a disturbing moment in history visible be an act of civil participation? How can it be an act of hope? What role does history play in that healthy democracy? And is it necessary to recognize past injustices in order for democracy to be possible in the present."

The bill, however, never made it to the Senate floor, so proponents negotiated to get it attached to the omnibus state budget proposal to give it its best shot at becoming law. The $24 billion budget bill, however, became mired in unrelated political divides over health care and teacher pay, leading to a veto from Democratic Gov. Roy Cooper.

"I want to see this passed into law," House Speaker Tim Moore, R-Cleveland, told ABC11 on Wednesday. "It will get re-filed, it will get re-heard and I suspect it will pass unanimously. With so many of the folks who lived through it now no longer with us, you have kids who have no idea of this, except for some abstract historical issue. But it's a real issue. One of the more moving experiences I've had is taking my sons to the Holocaust Museum in Washington. To go there, to see it, the piles of shoes, the railroad cars. To think that a people who were supposed to civilized -- thought that was right."

On Wednesday, Cooper's office also vowed to support the General Assembly efforts to re-file the bill.

"On this International Holocaust Remembrance Day, it is more important than ever that we remember the lessons of history as we continue to work to dismantle systemic racism and anti-Semitism," a Cooper spokeswoman wrote to ABC11 in a statement. "The Governor believes students should learn accurate lessons of our history, and he will work with the legislature to support initiatives that aim to educate students on these events."
Report a correction or typo
Related topics:
educationraleighnceducationlegislationgeneral assemblyhistoryholocaustjewishroy cooperteachers
Copyright © 2021 WTVD-TV. All Rights Reserved.
TOP STORIES
Walnut Creek welcomes fans back for first live event since 2019
2 killed in double shooting on I-85S entrance ramp near Duke St
Company wrongly charged woman monthly since 2019
Brisk crowds greet return of Peak City Pig Fest
Family continues legacy of man who died in car wreck
NC counties with more cases have fewer vaccinated residents
Show More
Black car buyer's experience marred by dealer's 'racist' Facebook post
Study finds more African Americans are buying life insurance
Tokyo Olympic Stadium isn't just an arena - it's a message
Vaccinated Cary man details experience with COVID-19
Rise in RSV cases in Southeast during offseason
More TOP STORIES News