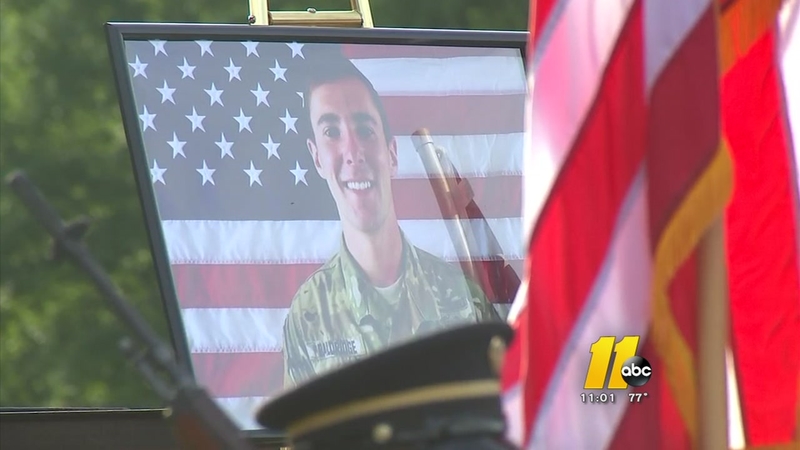 Flags were lowered to honor 22-year-old Dillon Baldridge, who was killed in Afghanistan after a member of the Afghan army opened fire on his American compatriots.

Baldridge was assisting Special Forces and training members of the Afghan Army.

ABC11 has learned that after his death, the U.S. Army promoted Baldridge from Corporal to Sergeant.

The community honored the fallen hero during a memorial service on Luddy Field, a place where Baldridge played baseball as a child.

During the service, family and friends remembered a man they described as funny and dedicated to serving.

His childhood dream was to become a U.S. soldier, and his dream came true.

"His mind was made up to be a soldier," his former childhood teacher told the crowd at Luddy Field.

Baldridge was one of his smallest cadets and the teacher didn't think the young man could survive the program, but Baldridge proved him wrong.

"I'm glad that the cadet program at Cedar Creek Middle School played a part in molding and shaping such a strong young man."

Baldridge was also described as sensitive. A childhood friend told the audience how he reacted to their first kiss.

"He was so ecstatic and nervous and all he did was kiss me on the cheek," she said. "But that is probably the most memorable kiss I had ever gotten. I miss him so much."

Vehicles and motorcycles of first responders, veterans, and Blue Star Moms paraded down a one-mile stretch of U.S. 1 before the tribute.

"I'll be praying for him and his family," said Jennifer Watts of Youngsville EMS and Rescue.

"It's going to take community support like this to get them through," Police Chief John Green stated.

"He means the world to me and I can't be more proud to call him by brother."