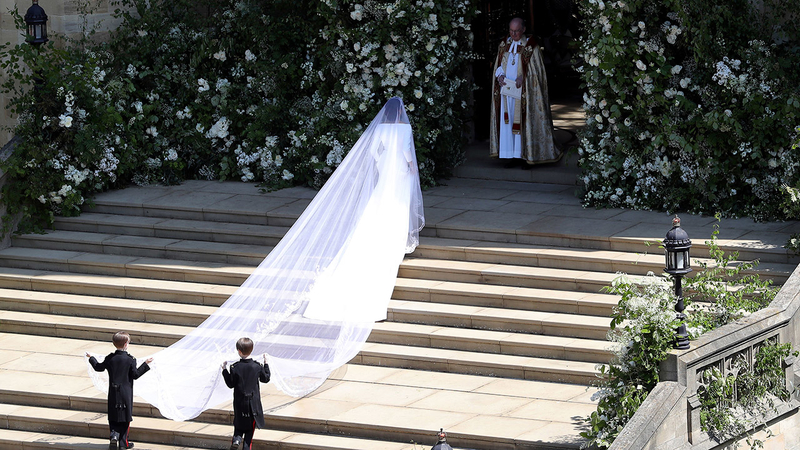 It was the question on everybody's mind: what will Meghan Markle wear to her royal wedding to Prince Harry?

The palace released the following description of the dress' design: "True to the heritage of the house, the pure lines of the dress are achieved using six meticulously placed seams. The focus of the dress is the graphic open bateau neckline that gracefully frames the shoulders and emphasizes the slender sculpted waist. The lines of the dress extend towards the back where the train flows in soft round folds cushioned by an underskirt in triple silk organza. The slim three-quarter sleeves add a note of refined modernity."

Markle wanted to incorporate all 53 countries of the English Commonwealth in her ensemble, and her 16-foot veil included "the distinctive flora of each Commonwealth country united in one spectacular floral composition," according to palace officials. The palace said workers spent hundreds of hours sewing the delicate flower designs into the veil, meticulously washing their hands every half hour to keep the silk tulle and threads clean. The palace said, in addition to the Commonwealth flowers, Markle also selected two other plants: Wintersweet and, in a nod to Meghan's birthplace, the California Poppy.

She chose Queen Mary's diamond bandeau tiara to hold the veil in place. The bandeau was made in 1932 and has a brooch from 1893.

Markle's Givenchy wedding shoes are made of silk duchess satin.

The clean lines of the white dress highlighted Markle's smiling face Saturday as she sat at the altar of St. George's Chapel, holding Harry's hand as the sprawling train lay at her feet.

"It's brave to not have decorations and embellishments. What a strong fashion statement. It's modern and classic at the same time," Phillipa Lepley, a leading London bridal designer, told The Associated Press. "The overall look is very '50s and gorgeous!"

The dress featured no lace or embroidery, carrying an A-line skirt with a train measuring about 70 inches from the waist. Markle complemented it with a bracelet and small diamond stud earrings.

"The dress is simply beautiful in its classic simplicity," said Caroline Burstein, owner of Browns Bride, a top London bridal boutique. She called it "a nod to Grace Kelly, Audrey Hepburn and every iconic wedding we have witnessed throughout the 20th and 21st century. It's perfect for her and for the occasion they are celebrating."

"There are no seams in the bodice," Lepley noted. "Incredibly clean and plain dresses such as this are very time consuming and complicated to make, because unlike a lace dress, there is no room for any errors. You can't hide any wrinkles, as the fabric has to sit perfectly."

Markle's choice was no casual affair. Televised royal weddings like this one have a massive effect on what brides everywhere want to wear and are closely watched across the fashion industry.

As with many royal occasions, every item of clothing was laden with history and meaning.

The forget-me-nots in the bridal bouquet were a nod to the late Princess Diana, Harry's mother - they were her favorite flower. The myrtle sprigs packed among them were drawn from a plant grown from myrtle used in Elizabeth's wedding bouquet in 1947. Other flowers were hand-picked by Harry himself from the garden in Kensington Palace.

The designer of Markle's dress was one of the wedding's most closely-guarded secrets, sparking months of speculation.

Waight Keller was a surprise choice -- her name was not among the many designers slated to be possible contenders for what many call the dress commission of the year. Educated at the Ravensbourne College of Art in south London, Keller kicked off her career at Calvin Klein in New York designing women's ready-to-wear before moving to Ralph Lauren to work on the men's "Purple Label."

After stints at Gucci, Pringle and Chloe, she was appointed as artistic director of Givenchy haute couture and women's and men's ready-to-wear last year.

It's likely one of them will have designed Markle's second dress for the evening reception being hosted by Prince Charles.