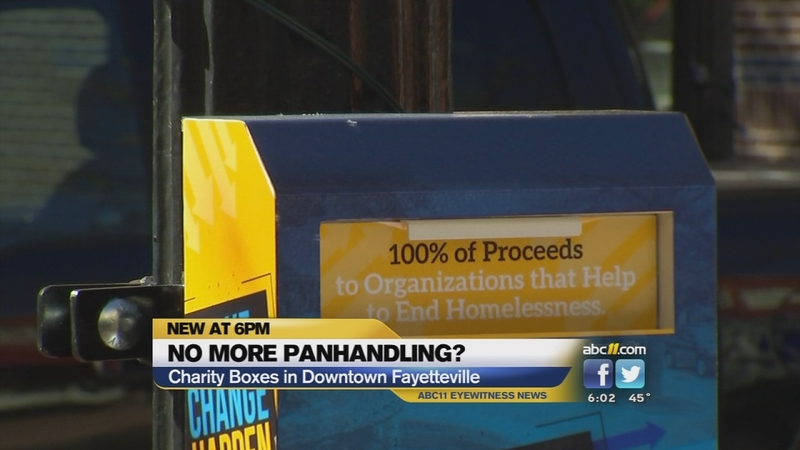 It's the latest effort by city leaders to provide support for the homeless and deter panhandling. The six boxes, unveiled by the Downtown Alliance Tuesday morning, allow patrons to donate money to the city's homeless instead of dropping money into the hands of panhandlers.

Every quarter, the Alliance will choose a different homeless shelter to support with the donations. The first quarter's earnings are going to Operation InAsMuch.

"Not only are we helping address an issue in the downtown with panhandling, but I think we're also providing a tool for all citizens whose hearts are touched by the plight of the homeless that 'this is a legitimate way that I can make a difference'," said former Fayetteville mayor and current Alliance leader, Tony Chavonne.

City leaders began studying the giving box model about seven years ago, closely looking at the program in Brooklyn, California. The boxes are welded to light poles and have a pull-down door to insert money. The Alliance empties the funds weekly, placing them aside for the current non-profit's aid.

While panhandling is illegal in Downtown Fayetteville, leaders said this effort with further enforce the idea, and reassure people that their money is really going to the homeless.

"This is not a city council or Downtown Alliance effort," said Deviere. "This is a citizen effort."

Since the boxes were installed last Wednesday, Downtown Alliance Executive Director Heidi Kelley said $27 have been collected. An awareness campaign has launched, with pamphlets in downtown businesses.