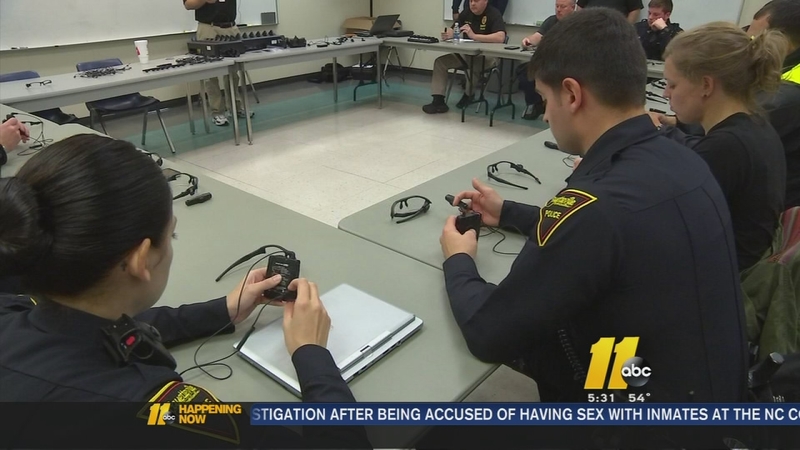 FAYETTEVILLE (WTVD) -- Perception versus reality. Sometimes, they're not one in the same.

McCarter, a contractor for the Taser body camera manufacturer, insists the soon-to-be-worn cameras are about officer safety as much as they are about citizens' safety and critical accountability.

"This is where body cameras will help us as police departments," he continued.

That just a snippet of the body camera training session held at Fayetteville Police Department headquarters. This week, the department trained its 300 patrol officers on the new technology that will hit the streets on Monday.

"I think the instructor said it best--they're going to learn a lot about themselves," said Matthew Dowd, who oversees the body camera program for FPD."'I sound like that? I look like that?' You know, that sort of stuff."

The officers, who rotated between small classes over five days, were trained on the Taser Axon Flex camera models by contractors with the manufacturer. They literally begin the classes with visual presentations on perception versus reality.

In a training video from the Dallas Police Department, one of many departments using the Axon models, the officers take a look at the scope of the cameras, and how the video was used to verify what took place in a number of different scenarios. The videos range from a marijuana bust following a traffic stop, to a use of force incident, and an officer aiding a carjacking suspect who was severely injured in a thwarted attempt.

In a second video, McCarter showed a thirty second clip of officer tasing a woman's boyfriend on a motel balcony in Denton, Texas. During the entire exchange, the man and woman pleaded for police to stop and get away from them.

The video prompted national scrutiny and a call for the officers involved to be fired immediately. That was until the entire 20 minute exchange was released through body camera footage, said McCarter.

That's when the public realized the officers had responded to a naked, mentally-ill woman carrying a baby in the parking lot of that motel. As they tried to conduct a mental evaluation, her boyfriend refused more than thirty commands to back up and give them room to take care of the woman and child. When he refused, he was tased.

"Those officers went from zeros to straight heroes," said McCarter.

But FPD supervisors warn against any conclusion made from snippets of any recording, including theirs.

"This is just one perspective," said Dowd. "The video is not the solution to all issues. It definitely will help, but I think it's just important for people to know that whether it's our video camera or someone else's video camera, that's not the whole story."

FPD officers were introduced to a number of options for wearing the body camera gear. How you wear it depends on what's comfortable for you, the instructors explained.

The cameras can be attached to Oakley glasses, headbands, collar mounts, and epaulette mounts.

In Charlotte, instructors said 80 percent of the force prefers the headband attachment, while only one of several hundred Dallas PD officers in the program has picked that option.

Flashing red means the cameras are recording. Yellow means you may need to replace your cord. FPD has regulations in place about when to begin recording your shift and when to stop.

Officers all have to download their footage to a mount that transfers the video to an iCloud-type account. Depending on the type of stop made, the footage will be saved for several months or eternity.

AVAILABILITY TO THE PUBLIC

How much of the body camera footage will be available to public? How much of it is legal fair game?

North Carolina lawmakers haven't quite figured that out.

"I know the legislation, they're tussling with this right now," said Dowd. "'What are we going to do? What do we release? What do we don't?'"

Right now, state law doesn't make video currently in open investigative files available to the public. But, the department can release videos at their discretion, and following investigations, those other videos may be requested. It's all up to lawmakers.

"Because the issue is, if you release one video, then the expectation is that your release all the video," explained Dowd. "So then you get into, well, what about rape victims? Do you release that video? Juveniles....So they gotta figure that out. There's a lot to figure out."

Read more about that legislation here

In the meantime, FPD officials say they do plan on releasing videos that don't fit into that open investigation category, and they suspect they'll refer to them on a daily basis for discipline, internal investigations and training purposes.

"I mean, there's probably incidents where officers are accused of everything from being rude to most critical thing you can be accused of and a 30 second video could just squash that whole thing," said Dowd, snapping his finger.

While patrol officers are the first to be outfitted by the new technology, it may very well expand to the entire deparment, including detectives, in the future. That will boil down to finances.