'I'm obviously nervous with what happened in the past': Raleigh business owner concerned about threat of armed protests 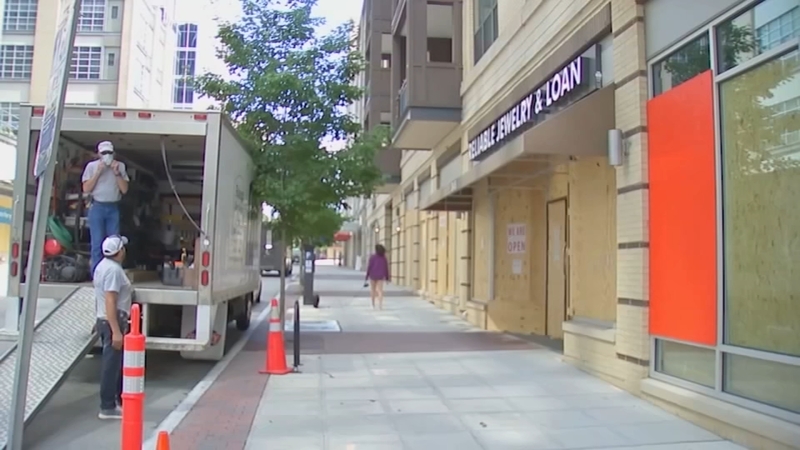 RALEIGH, N.C. (WTVD) -- Alan Horwitz, owner of Reliable Jewelry & Loan, is still debating whether he'll board up his downtown Raleigh business after the FBI's warning of plans for nationwide armed protests in all 50 state capitals. The protests are set to last from Saturday through the inauguration of President-elect Joe Biden on January 20.

The warning follows the chaos at the Capitol. In Wake County, officials are preparing for more protests planned for this weekend and possibly through Inauguration Day. Several county buildings downtowns will be closed in the days ahead and Raleigh Police are on alert.

"I'm obviously nervous with what happened in the past," Horwitz said. "So I'm not sure what I'm going to do."

The windows of the business, which has been in Horwitz's family for three generations, were smashed and valuables stolen.

An FBI bulletin issued Monday warned of armed protests planned at all 50 state capitals ahead of the Biden inauguration.

"They broke in both nights and it was over $100,000 in damage to my shop," said Horwitz. "So, it was certainly something I'll never forget, probably the two worst nights of my life."

Since then, he has implemented extra security measures, like getting new steel doors and windows with extra strong glass. But he's still concerned.

'Kill him with his own gun': DC Metropolitan Police describe facing the mob at the Capitol

"I'm hoping the authorities and the National Guard have it under control and it's contained and hopefully, if there are protesters, hopefully they stay at the (North Carolina) Capitol and not roam the streets of downtown (Raleigh)."

Raleigh Police said that they along with federal, state and local law enforcement partners "will remain vigilant for possible protests and actions of civil unrest during this time and into the foreseeable future. Our personnel are monitoring this information as we develop strategies to address illicit activity, should any occur."

The City of Raleigh urged business owners and residents to take cautionary measures:

The Wake County Sheriff's Office said Friday that in anticipation of planned protests through next week, the John H. Baker Jr. Public Safety Center will be closed to the public on Tuesday, and Wednesday.

Wake County is closing all county offices in four of downtown Raleigh buildings on Tuesday and Wednesday. Besides the Public Safety Center, the Wake County Courthouse, the Justice Center, and the Wake County Office Building.