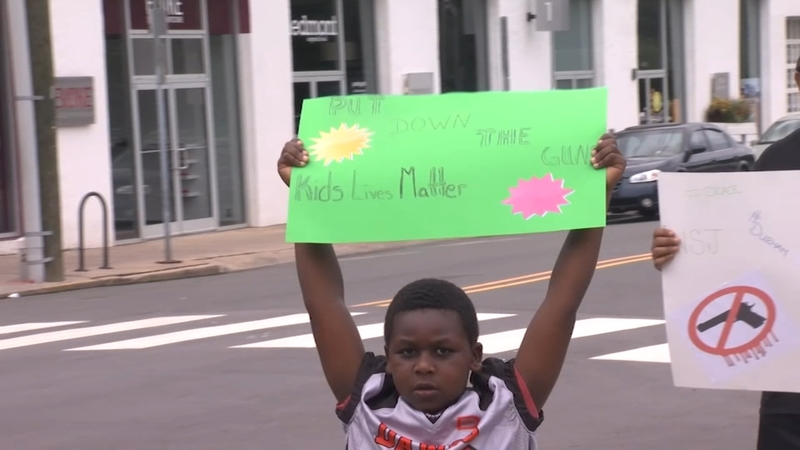 Rally for 9-year-old shot and killed held in Durham

Youth football players from around the Triangle area held a "Stop the violence" rally in downtown Durham Sunday for 9-year-old Z'Yon Person, who was shot and killed last week.

"He's still deep in my heart-deep in my heart still. And he always will forever," stated Deane Carr, who played football with Z'Yon for the Tri-County Panthers.

Z'Yon's aunt, Danyell Ragland, and five children - some as young as three -- were in the car at the time of Sunday's shooting.

Ragland told ABC11 they were on their way to Pelican's SnoBalls to get snow cones, when a series of bullets hit the family's SUV. Z'Yon died from a gunshot wound to the head. Another child was injured, but survived.

"They're going to rot in hell for what they did," Ragland told ABC11.

Police say the shooting was targeted and had signs of being gang-related.

On Sunday, the five football teams marched from the downtown YMCA to the CCB Plaza with signs of support.

"It's time for the kids to have a voice," Evans stated. "I felt like this was the best way to do it."

13-year-old Daniel Carr tells ABC11 it was important for him to march because he doesn't want the gun violence to get worse.

"We came out to represent and that the black community need to raise up and stop the gun violence," Daniel Carr stated.

Children at the march had a message to the person responsible for Z'Yon's murder:

"It's very bad to kill people" and "Put the guns down."

Police say they are receiving tips but so far no arrests have been made.

A vigil for Z'Yon was also held in Durham Sunday evening.

Many family members were in attendance, including Z'Yon's mom.

Z'Yon will be laid to rest on Tuesday.

Z’Yon Person will be laid to rest Tuesday. Right now family and friends have dedicated a memorial to him at the corner where he was shot and killed in Durham. He was 9-years-old. #ABC11 pic.twitter.com/nT8KZIaFws

Prayers going up for Z’Yon’s family who are surrounded by loved ones. #ABC11 https://t.co/Wh9vrr35TI pic.twitter.com/y6Kxv4LmLv