Good Samaritans rescue driver of overturned pickup truck on I-88 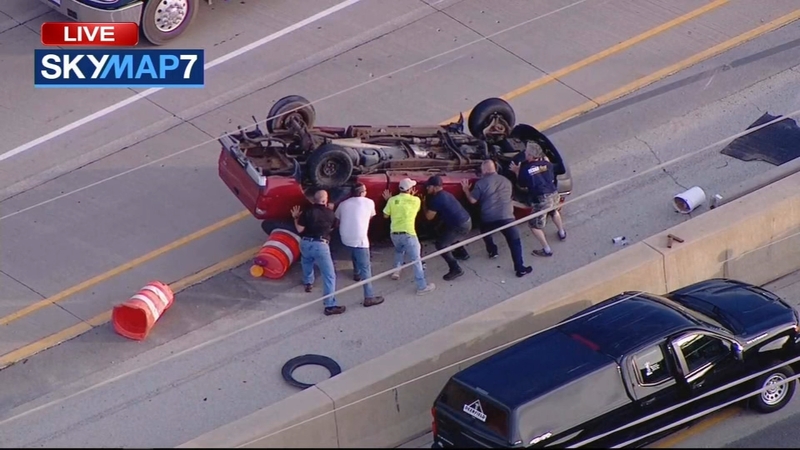 OAK BROOK, Ill. -- A group of good Samaritans came to the rescue of a driver of a pickup truck that flipped over on Interstate 88 near a Chicago suburb Monday morning.

Video from a news helicopter shows the pickup truck turning over after a tire blowout in the westbound lanes of I-88 in Oak Brook, Ill. at about 6:47 am.

A group of good Samaritans, including several construction workers, got out of their cars and flipped the pickup truck back on its side.

Chopper 7HD flew over I-88 near York Road as a pickup truck flipped over Monday morning.

A driver of an overturned pickup truck is able to get out of the cab with the help of some good Samaritans on I-88 Monday morning.

"At that point, I knew we had to get the windshield and try to cut the seatbelt," Meyers said.

Using the tools from the construction workers, Tom and the others broke the windshield and tore off the driver's seatbelt, freeing him.

"He was standing there and he said, 'I want to get out,'" Meyers said. "I said we should probably wait for the fire department to show up and that's when he proceeded to jump out the window."

The group, realizing he was OK, started to cheer. That's when fire crews and an ambulance from Oak Brook, Ill. arrived and transported the driver to an area hospital.

"Anytime you see like that happen you always have that urge to help," Meyers said.