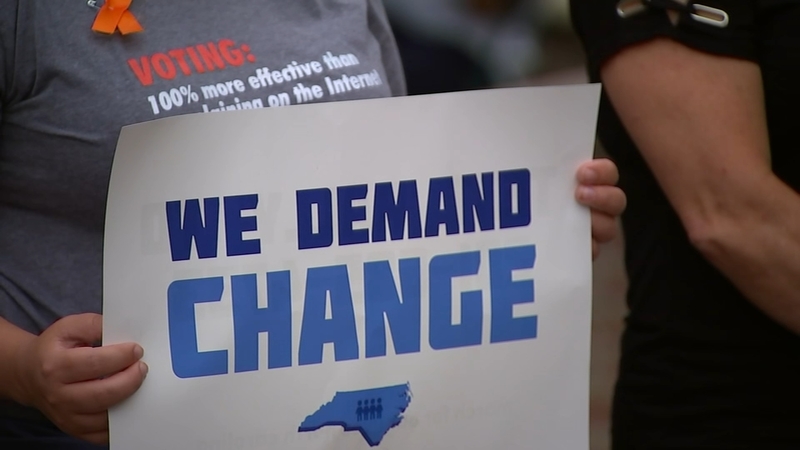 "How many more children have to die?"

Those were the chants ringing out at a March For Our Lives vigil in downtown Durham. The event was organized in just six hours but it was still able to bring together a group of like-minded North Carolinians hoping to enact change in Washington.

"I'm a praying kind of a girl. I am praying hard, but prayers are not the only thing we need. We need more," said Kaaren Haldeman with Moms Demand Action for Gun Sense in America.

This child reads a poem “How Many?” #daytonshooting #ElPasoShooting pic.twitter.com/q5BXvwzulR

"I am beyond angry at their negligence as leaders and I am telling you right now that they are no leaders of mine and I promise to uphold that when I vote in 2020," said Lauren Smith with March For Our Lives NC.

Two years ago, State representative Marcia Morey of Durham sponsored the Red Flag Law, a bill that would empower someone to petition a judge to temporarily remove a gun from someone who shows suicidal or threatening behavior. The bill is stalled.

"Fifteen states have done it so far. Republican states. This isn't a political partisan issue. This is a public health. It's the safety of people," Rep. Marcia Morey said.

It's normal to feel anxious and nervous after seeing the aftermath from Dayton and El Paso, and because of that, experts are speaking up to help anyone who may need assistance.

Psychologists say it's important to take a breath and think about what action you can take to express your feelings.

So it's important for adults to reassure children, and themselves, that they can continue living their lives.

"The likelihood that this is going to happen to us is still relatively small. It doesn't feel like it when we wake up to Dayton right after going to bed from El Paso," Gurwitch said. "But it is critical that we also say 'hey this is not going to change who we are. We are still going to go to the mall. We're still going to go to food festivals. But we're also going to do something actively.'"

Experts say it's normal to feel anxious and nervous after seeing the aftermath from Dayton and El Paso.

Experts said writing, or contacting your local leader or members of congress are other forms of action. You can also seek professional help.

Sunday, a March for Our Lives Vigil is taking place in downtown Durham to honor and recognize the people killed and injured in the weekend rampage.