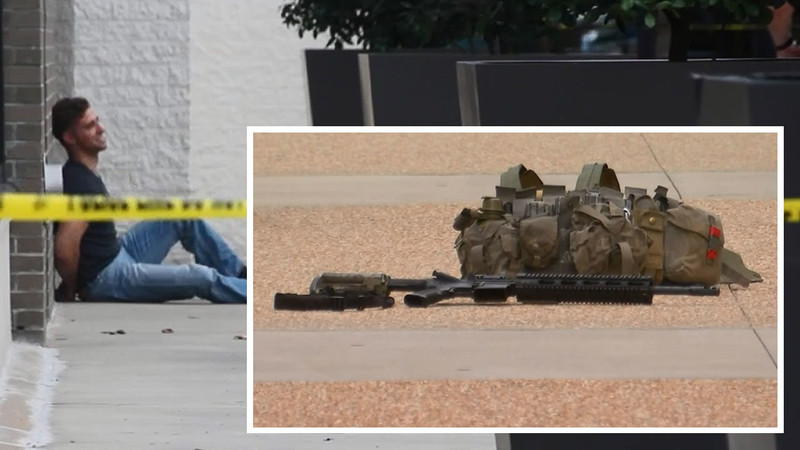 FAYETTEVILLE (WTVD) -- The Fayetteville Police Department has charged an Army soldier after getting multiple reports of an armed gunman at Cross Creek Mall Thursday evening.

A huge number of law enforcement officers flooded the mall located off the All American Expressway when 911 calls started coming in just before 6:30 p.m.

On Friday, Fort Bragg officials confirmed the rifle belonged to Wolfinger and was not military issued.

Fayetteville Police spokesman Lt. Todd Joyce confirms Bryan Scott Wolfinger had some loaded high capacity magazines in his bag while he was at the mall. The 25-year-old soldier was carrying an AR-15 rifle, a military ballistic panel carrier and wearing a Kevlar vest.

"All of our weapons are accounted for and secured through the day,"said spokesman, Tom McCollum. "The only time they're issued out is when we're going to a range or going out for training. People are not allowed to take their assigned weapon to any sort of photo shoot."

Police said Wolfinger apparently came to the mall with the intention of getting his picture taken with the military gear - something police called a "poor decision."

"It was basically a soldier who wasn't thinking," said McCollum. "If you think about it, everything worked beautifully. No one was hurt. The mall reacted quickly and the soldier fully understood as everything started to come toward him, he understood what he had accidentally."

McCollum didn't have details surrounding the Post's actions in light of the incident.

Eyewitnesses said it was a moment of sheer terror.

On surveillance video, the man wearing a military vest and carrying an assault rifle was seen walking into and out of the mall entrance. Police said he was arrested outside the building near the Macy's wing of the mall.

"Within two minutes, we had officers on the scene. The first two responding officers made contact, gave him a verbal command, [and the] subject complied and they took him into custody," said Fayetteville Assistant Police Chief Anthony Kelly.

Police have now charged 25-year-old Bryan Scott Wolfinger with "going armed to the terror of the public."

On Friday, the photographer who took Wolfinger's photos confirmed he had completed a photo session prior to the evacuations and his detainment.

Wishing to remain unidentified, the photographer told Eyewitness News that the Picture This Portrait Studio had no idea Wolfinger was bringing weapons to the session.

Frightened by the sight of the rifle, the photographer said Wolfinger reassured her she was safe by showing her the unloaded gun, and allowing her to hold it.

A manager authorized the photo session, which was completed within an hour and a half.

The calls to 911 were made almost immediately after Wolfinger left the photo studio.

The photographer said Picture This Portrait Studio will no longer conducts photo sessions with people using weapons as accessories.

Cross Creek Mall already has a 'No Weapons' policy in place, with signs posted in general areas.

Wolfinger was processed at the Cumberland County Detention Center and later released to his company commander and provost marshal at Fort Bragg.

North Carolina is an 'Open Carry' state, with the following restrictions in place: http://www.ncdoj.gov/getdoc/19be6294-bfbf-4875-bbef-ac2ebb6f47b2/Concealed-Weapon-Reciprocity.aspx