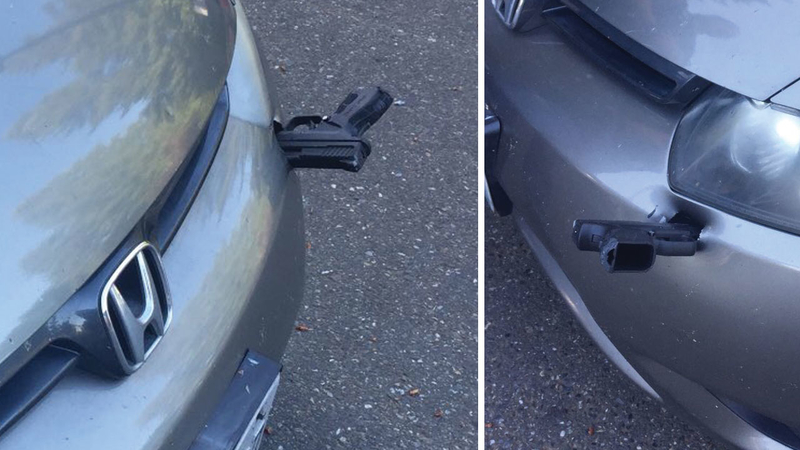 Driver finds handgun lodged in his bumper after thud on freeway

LAKEWOOD, Washington -- A driver in Washington state pulled over to get gas only to find a small handgun stuck in his bumper.

According to Trooper Guy Gill with the Washington State Patrol, the motorist was driving his grey Honda along Interstate 5 when he saw a small black object flying through the air and felt it strike the front of his car.

Well...this is a first 🤷🏻‍♂️! Driver saw a small "black object" in the air while driving on I-5 and it struck the front of his car. He drove about 18 miles, stopped for gas, and found this. We recovered it and turned it over to @LakewoodPD. pic.twitter.com/Oo3KlbW362

Thinking nothing of the incident, the driver continued on for another 18 miles. When he stopped at the gas station, he found the handgun lodged barrel-first into his bumper.

Gill said his agency recovered the handgun and turned it over to local police in Lakewood, Washington. It's not immediately clear where the firearm came from.

"It could have been thrown from a car, it could have been on the road and another vehicle drove over it flinging it into the air, we just don't know," Gill told ABC News.
Report a correction or typo
Related topics:
washingtonbizarregun safetyu.s. & worlddrivingguns
Copyright © 2022 WTVD-TV. All Rights Reserved.
TOP STORIES
LIVE: Snow exiting area, leaving thin blanket of white
New study highlights where you are most likely to catch COVID-19
NC man denied life-saving kidney transplant over vaccination status
Widow delivers heart-wrenching eulogy for NYPD detective
In wake of Pittsburgh bridge collapse, how safe are NC's bridges?
Restaurants, battered by wintry weather, hope business stays brisk
News & Observer: There are 54,000 possible Cook Out combos
Show More
Cooper vetoes bill that would push NC primary to June 7
How many times can I reuse my N95 mask?
10 injured in PA bridge collapse; human chain formed to help
Decades after TV anchor disappears, convicted rapist denies connection
LATEST: Breakthrough cases make up 37% of new COVID infections
More TOP STORIES News