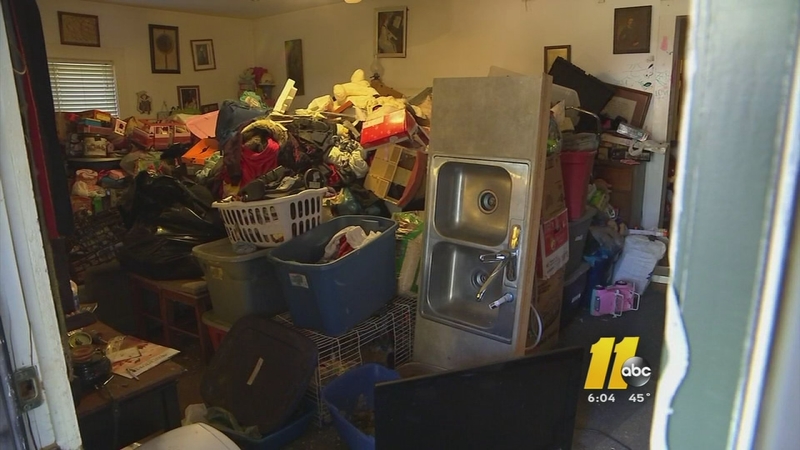 WENDELL, N.C. (WTVD) -- Tuesday afternoon, Lisa Messick stood outside her Wendell rental property in disbelief. She just evicted her tenants after a legal battle and had gone inside the home for the first time in years.

She discovered the people renting out the home were hoarding and had abandoned at least a dozen pets.

A captain with the Wendell Police Department said they received a complaint about a strong odor, which prompted them to check out the home.

"(I feel) disgusted," said Messick. "I brought my kids home from the hospital to this house."

Animal Control rescued 10 cats, one dog, and a rabbit from the home in the 300 block of Cook Street in Wendell. There could be more animals inside.

"We've left a trap. We think there may be one more but there was no more than we can see or remove," said Wake County Animal Shelter Director Dr. Jennifer Federico.

Messick showed ABC11 the inside of the house minutes after the raid. There was trash piled up almost six feet high, cat food on the floor, and litter boxes filled. There was even a commercial sink standing upright in the living room.

10 cats,1 dog & rabbit seized from Wendell home.Homeowner shows us inside after she evicted renters #ABC11eyewitness pic.twitter.com/IcizE5qBjb

Messick says a couple and their two teenage daughters were living in the mess.

A hazardous-materials crew was called in to check out the home.

The conditions of the home and the raid shocked folks who live in the neighborhood.

"It's very disturbing to know it was just a couple houses away," said resident Chris Tiska.

Alive Harris lives next door to the home and said she regrets not filing a complaint. She says one animal in particular was constantly left outside and neglected.

"That dog could not last another winter," said Harris.

The animals are now being cared for by the Wake County Animal Shelter.

Messick said she is worried about the financial cost of cleaning up the home. She plans to move back into the house soon.

"Unfortunately, I found all this out when my husband passed away in April," said Messick. "My daughters and I will probably have to move into this house."

Charges have not been filed.