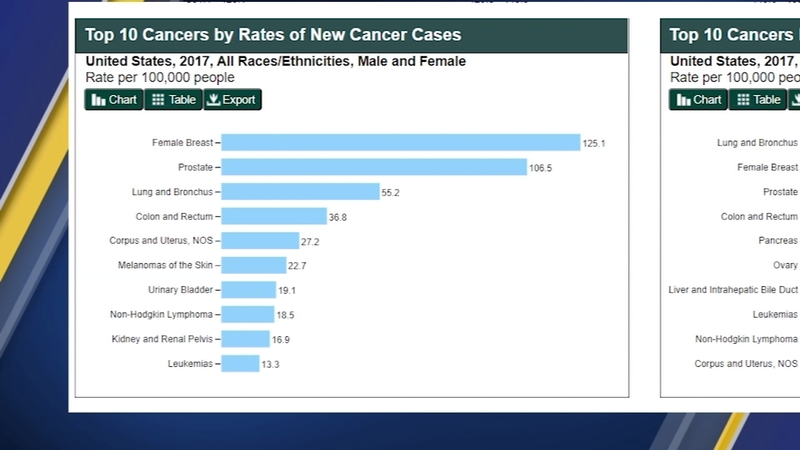 DURHAM, N.C. (WTVD) -- Following the death of actor Chadwick Boseman, medical experts are urging people to be more aware of signs and symptoms of colon cancer.

"Most commonly we see a little bit of bleeding in the bowels can be common, stool can be maroon or bright colored, some people can have a general abdominal discomfort," said Dr. Hanna Sanoff, a gastrointestinal medical oncologist and associate professor at University of North Carolina - Chapel Hill.

While colorectal cancer case and mortality rates have steadily dropped in the last few years, according to data from the Centers for Disease Control and Prevention, there is growing concern for younger patients.

"What we're seeing now is an uptrend in rates of colon cancer amongst young people, so patients younger than 50. And we're also seeing disparities in colon cancers in Black patients," said Dr. Yousuf Zafar, an associate professor of Medicine and Public Policy at the Duke Cancer Institute.

The CDC reports patients under 50 years old saw increased case and mortality rates in 2017 compared to the four-year average from 2013 to 2017.

Boseman was diagnosed with stage III colon cancer in 2016, before it eventually progressed to stage IV. He was just 43 years old.

"His death and his diagnosis was heartbreaking. But we're talking about it. People around the country and around the world are talking about it. And just by doing so, he has been able to raise awareness of this disease, particularly in younger patients. And my hope is that that awareness leads to patients paying attention to their symptoms," said Dr. Zafar.

In addition to knowing the symptoms, doctors stressed the importance of family history.

"That actually turns out to be the absolute strongest risk factor for colorectal cancer," said Dr. Sanoff.

Dr. Sanoff further urged people to take these symptoms seriously, expressing concern that fear of COVID-19 was keeping some people away from doctor's offices.

"We've had a lot of people who are ignoring things and waiting to get care until COVID goes away, and we really can't do that. We've got to be on top of our regular colon cancer screenings and mammography exams (used for breast cancer detection), etc. so that we don't find ourselves sicker than we would have been had we gotten that thing checked out," said Dr. Sanoff.

There is varying consensus on when individuals without family history should begin screenings; the American Cancer Society suggests beginning testing at 45 while the US Preventative Services Task Force recommends beginning at age 50.

In addition, the American Cancer Society suggested patients also consider whether they have inflammatory bowel disease, such as Chrohn's disease or ulcerative colitis, or if they have been exposed to radiation in their stomach or pelvic area.

Despite his diagnosis, Boseman continued to work, and even visited pediatric cancer patients at St. Jude Children's Research Hospital, with pictures of his stop being shared widely following his passing.

It’s not every day that St. Jude gets a visit from an Avenger! Thank you @ChadwickBoseman for stopping by to bring joy to our patients and learn more about our lifesaving mission! ❤ 🎉 pic.twitter.com/7RwPO7qgPD

His role as 'Black Panther' served as an inspiration to a generation of young people, including 12-year-old Michael Mack Jr..

"Just seeing him, seeing his face, playing a superhero, a superhero that is totally cool, really meant a lot to me and a lot of Black people," said Mack Jr.

Back in 2018, video of Mack Jr. receiving a Black Panther prosthesis went viral, and just as the superhero has inspired him, Mack is reaching out to others with amputations.


"I feel it's just important to help them out," said Mack Jr., who started his own YouTube channel 'Macks Dream,' where he included a video of him putting on his prosthesis.

Shortly after Boseman's passing, the Colorectal Cancer Alliance, a charitable organization, released a statement, urging further conversation over the disease:

The Colorectal Cancer Alliance mourns with Chadwick Boseman's fans, friends, and family over the loss of this bright star to colon cancer. His sad and untimely death should not be in vain. Somberly, we share that young-onset colorectal cancer is on the rise and cuts short thousands of lives every year.

Colorectal cancer benefits from an intense stigma, particularly in the Black community. Cancer is a personal battle, and we respect Boseman's choice to shield the public from his diagnosis. The Alliance, however, encourages open conversations about this disease. Even superheroes can develop colorectal cancer.

Colorectal cancer is the second deadliest cancer in the U.S. when men and women are combined, and it disproportionately affects our black and brown communities. With education and awareness to defeat the stigma, resources for those diagnosed, and innovative research toward cures, we can end colorectal cancer in our lifetime.
Report a correction or typo
Related topics:
health & fitnessncdurhamchapel hilluncduke universitycancer deathblack panthercanceramputee
Copyright © 2021 WTVD-TV. All Rights Reserved.
More Videos
From CNN Newsource affiliates
TOP STORIES