From homeless to hopeful: The Christmas wishes of the less fortunate 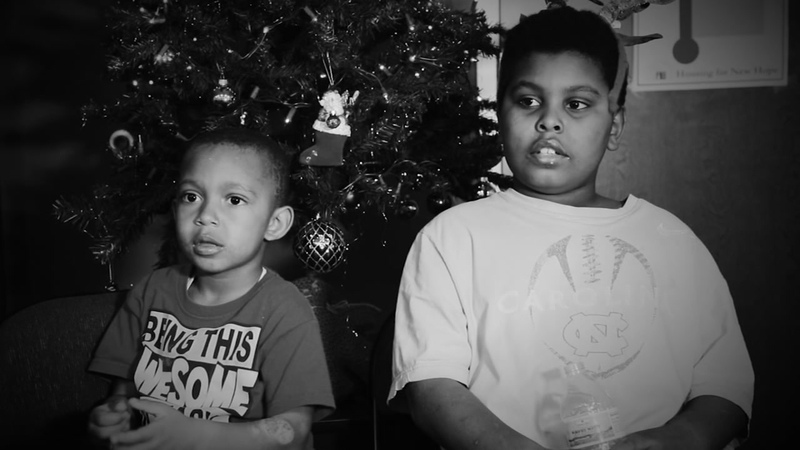 The Christmas wishes of the less fortunate

DURHAM (WTVD) -- The holidays can be a joyful time, but also a very tough time for those who don't have much, especially for those who are homeless.

I got to spend some time at the nonprofit, Housing for New Hope in Durham.

The nonprofit's goal is to prevent and end homelessness in the community.

During my visit, Housing for New Hope's holiday party had just wrapped up.

I got to meet several of the kids who live in one of the nonprofit's shelter.

They all had smiles and were eager to tell me what they wanted for Christmas.

One 5-year-old wanted a Barbie house.

Other top gifts were toy cars, games, dolls along with other typical toys kids ask Santa for.

However, the answer of Jeremiah stuck out to me.

He's a fourth grader, and one of five boys in his family.

I asked him what Christmas means to him.

He said, "Christmas means for me to celebrate with our family."

When I asked him if holidays were a good time, he said, "Bad time because mainly we don't have a car for travel. We lost everything we have."

He explained to me before finding Housing for New Hope, he and his brothers sold their toys.

He also told me he's had to keep being homeless a secret from some of his classmates because people make fun of that.

When I asked what he wants for Christmas, he answered, "All I want is a roof over my head," and he added, "I want people to know how good my mom is."

The good news for Jeremiah, Housing for New Hope is working on finding his family a permanent home.
During my visit, I also met Suevon Moncrief.

Moncrief along with her two teenagers have been homeless for the last several months.

"I don't think if you've ever been in this situation you could imagine what it's like, it's the hardest thing," Moncrief said.

Fortunately, she said Housing for New Hope found her, and it's been a blessing.

The nonprofit has been working with Moncrief, and just in time for Christmas, she and her kids will move out of the shelter and into their own place.

"I am blessed because I waited so long to find a place, and I thank God to be able to turn the key to my own door once again and be back on my feet."

They only have a king size bed to share between the three of them, but Suevon said it will do.

"We just have one king size bed right now, and that's it, but we have somewhere to sleep, and I think that's the most important thing right now," Suevon said with a smile.

She got emotional talking about all Housing for New Hope has done for her and her two kids, especially when it comes to finding them a place to call home.

"They were the biggest part of that because I'd still be at the shelter right now. I can't express it enough. I'm so happy and so thankful. Housing for New Hope did for me what I thought I couldn't get done and it means the world to me."

Housing for New Hope is running their First 1000 Campaign through December 31. Y