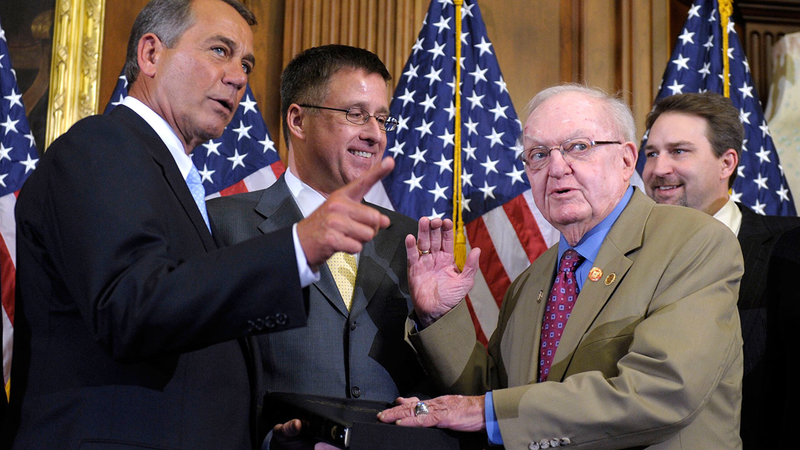 Coble served 30 years on Capitol Hill. In 2013, Coble announced his 15th term in Congress would be his last, and would not seek re-election in the 6th District due to health issues.

He had been hospitalized for a variety of ailments over the past few years, including a respiratory infection in late 2011 and recent surgeries.

Coble had a long political and military career, including nearly 30 years in the Coast Guard. He was an assistant federal prosecutor, state revenue secretary under Gov. Jim Holshouser and state House member before his initial 1984 congressional victory.

The congressman had been considered a reliable conservative representing the Triad region and surrounding counties. He was probably best known for his committee work on intellectual property issues and for refusing to take a congressional pension in the name of fiscal conservatism.

Funeral arrangements had not been determined early Wednesday.

Rep.Coble was kind,always made my day when I worked in the Triad.He'd give a big hug and kiss on the cheek w each meeting. RIP, Sir. #ncpol

In honor of Coble, Governor Pat McCrory ordered all U.S. and North Carolina state flags to be lowered to half-staff until sunset Thursday.

"With the passing of Howard Coble, North Carolina not only lost a wonderful public servant and congressmen, but our state also lost a friend and mentor to so many, including myself. He was a friend who was genuine, hardworking, sincere and honest. We will all miss our friend, but we'll never forget him and the good things he did for our country, our state and so many of us individually," McCrory said in part in a statement.

"We are deeply saddened to learn of Congressman Howard Coble's passing today, but we are at peace knowing he is in a better place," Walker said in part. "Our community was blessed to have had his leadership in Washington for thirty years, but we were even more blessed to call him a friend and mentor. He represented North Carolina with humility, honor, and always a little humor. Our community not only lost 'Our Congressman' today, but one of our heroes."

"Howard Coble was a friend, colleague and a mentor," Senator Richard Burr said. "He was a true statesman and represented his constituents with passion and effectiveness. Howard will be missed but never forgotten by all who called him friend. It's a sad day for North Carolina but it is a joyous occasion that Howard is once again with his parents he loved so much."

"Susan and I are heartbroken to hear of Howard Coble's passing. He dedicated his life to improving the lives of others, first serving our nation as a Coast Guard captain during the Korean War, and then serving the people of North Carolina for 30 years in Congress. He was the true embodiment of a public servant who put the needs of constituents before all else, utilizing civility and finding common ground to solve problems both local and national," Senator Thom Tillis said in part. "Our nation would be far better off if we had more public servants like Howard Coble. He will be dearly missed by the people of North Carolina."

"It is with a heavy heart that I express sadness over the passing of my friend and colleague, former Congressman Howard Coble. During his Congressional career that spanned three decades, Howard was a strong voice and advocate for his constituents," Congressman G. K. Butterfield said in part. "Howard was a hardworking and dedicated public servant and will be greatly missed. I extend my sympathies to the Coble family during this very difficult time."

"Renee and I were saddened to learn of the passing of my friend Howard Coble," Representative Richard Hudson said. "Howard dedicated his life to serving North Carolina and did so with the utmost honor, integrity and kindness. He never met a stranger and set the standard for constituent service. We join North Carolina in mourning the loss of a true gentleman and faithful public servant, but find comfort in knowing Howard has found peace with our Savior."