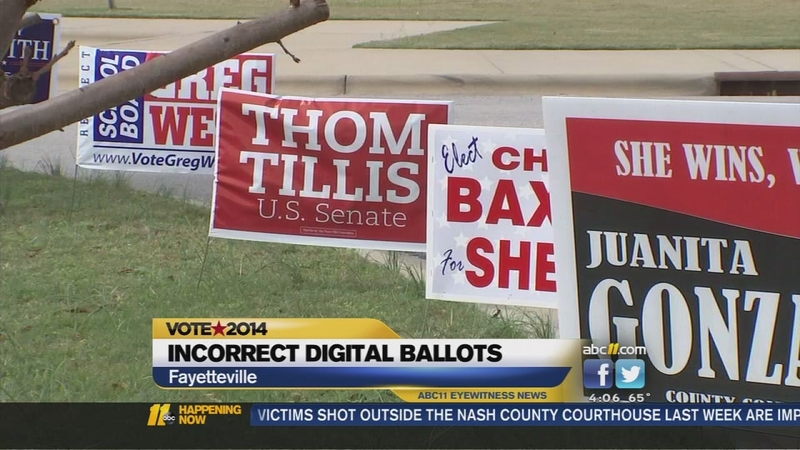 The sites moved from electronic to paper ballots following a mishap that lasted for nearly two hours at the start of voting Tuesday morning.

"They started to trickle out quicker than the normal voting time and I said, 'What's wrong,'" said Debbie Lown, a campaign volunteer at the Gray's Creek Middle School site. "They said they were having problems with the computer so they had to hand look-up everybody."

"Some were pretty perturbed about it and others seemed to make the best of it and came back," said Wilbert Harrison, another campaign volunteer.

Voters who reached out to ABC11 via social media said the subsequent wait caused some people to leave the polling sites in order to get to work on time.

"We were all encouraging them to come back if they had time, and some of them said they wouldn't be able to come back because of work and child care issues," Lown said.

Terri Robertson, the director of the Cumberland County Board of Elections, said the 10 polling sites affected were located in Hope Mills, Fayetteville, Stedman and Beaver Dam.

The mishap caused voters to see an entire Cumberland County ballot, instead of a district-specific one, and those ballots could not be printed.

"They all had emergency back-up supplies," said Robertson. "I had a back-up to my back-up."

Robertson said she fielded calls about the issue all morning, but insisted the problem didn't cause voters to turn away.

"No one had to leave," she said. "It just took a little longer."

It is unclear how many voters were affected, or how the thumb drives were delivered to the wrong sites.

Robertson said the problem was fixed quickly, and was no longer an issue by 10 a.m. when ABC11 first touched base with her. She said all the sites now have the correct thumb drives.

"Let's hope they come back," Lown said -- referring to the voters who left in frustration.

Hundreds of voters showed up to the Cliffdale Recreation Center in Fayetteville, and found out it was not an Election Day polling site.

"There's no explanation. There's no one sitting there telling you, you know here's what's going on," said voter David Bennett. "So I stayed in line for 15 minutes and finally figured out everybody's getting turned around and walked out."

Voters said they'd always been to the center to cast their ballots, but a Board of Elections employee who came out late in the day to calm voters said the center had been an early voting site for more than a decade.

Another Board of Elections worker looked up the proper polling place for anyone who came to the rec center to vote. Many people said they stood in line thinking it was to vote. Instead one worker was there to send them to an alternate site.

"As a courtesy, we put someone here to look up your polling site," said Bill Helms, with the Board of Elections.

Heated voters challenged Helms on the effectiveness of the process, and why there weren't signs to redirect voters before they got in line.

"There could've been a sign, I mean it doesn't take rocket science," said Amy Huffman. "It really doesn't. An ID makes sense. This doesn't."

"We've tried signs in the past," he said. "People still get confused about where to go, so we try to help them [with the BOE employee]."

Just before 5 p.m., Helms called the BOE and Fayetteville police regarding a handful of angry voters. A police officer pulled into the parking lot to check on the crowd, but there was no issue by the time he arrived.

"They're aggravated going to places they're sending them," said Cheryl Hester, pointing out confused, older voters. "And one lady said I hope the GPS gets me there."

Hester said she saw some voters return to the rec center because they'd been sent to the wrong polling site. Others, like 66-year-old Mary Ray of Fayetteville, said they were told they were registered.