I-Team: How drugs are smuggled into North Carolina without crossing the southern border 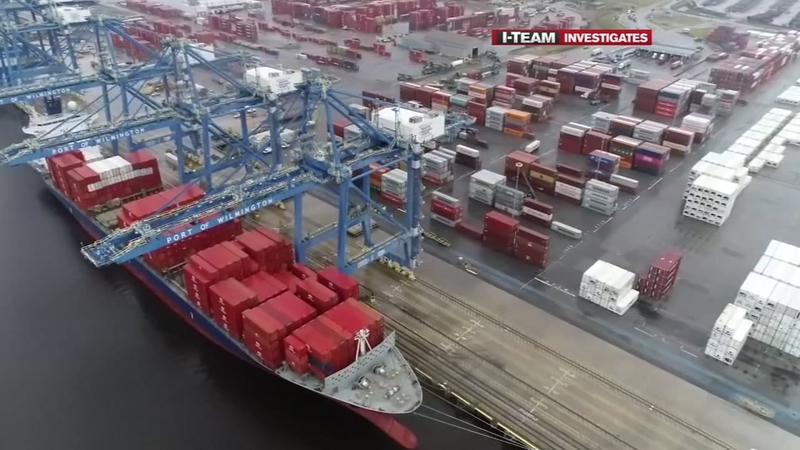 I-Team: How drugs are smuggled into North Carolina without crossing the southern border

WILMINGTON, N.C. (WTVD) -- Mexico may be 1,000 miles away, but North Carolina still has five Ports of Entry that open the state's doors to the global economy -- and smuggling.

"It doesn't matter if it's a seaport, airport, border crossing, private airfield," said Barry Chastain, North Carolina Port Director for U.S. Customs and Border Protection. "One individual that's coming here to harm the U.S. is too many, one drug is too many, one agricultural item that carries a pest is too many. That's what our goal is - to make sure that doesn't happen."

An ABC11 I-Team investigation, however, found that federal and local law enforcement officials are warning of an increasing threat to our region's ports of entry with much attention at the physical border between the United States and Mexico.

"The officer here making a decision at RDU is just as important as the officer on the southwest border," Chastain asserted to ABC11. "Every person that comes into the United States has a risk of bringing something illicit into the country whether it's agriculture, narcotics, opioids, anything that comes in."

The I-Team submitted several requests for incident reports and CBP operations in the Atlanta Field Office, which encompasses border protection teams in North Carolina, South Carolina, Virginia and Georgia. The data obtained by the I-Team shows 418 major drug seizures since 2016, including cocaine, marijuana and heroin.

Among the most significant busts:

The U.S. Customs and Border Protection's operations in North Carolina focus on five designated Ports of Entry, which is defined as a legal point by which people or goods can enter the country.

According to data obtained by the I-Team, nearly 8 million international travelers entered the United States through North Carolina airports, including 1.7 million foreign nationals. The majority of foreign nationals were from the United Kingdom, Germany, France, Italy, India, Brazil and Mexico.

In 2018, CBP processed approximately 7,634,850 air and sea passengers, along with more than 2.5 million cargo shipping containers.

"The threats are endless," Scott Opalka, CBP's senior officer at the Wilmington seaport, said to ABC11. "The threat is always there whether it's a radiological device, whether it's narcotics, counterfeit goods, foreign pests or soil material. Unfortunately, there is no one holy grail. We have to take a comprehensive approach and bits and pieces of technology and integrate them into our knowledge and capabilities."

Cpl. Jason Cummings, of the New Hanover Sheriff's Office, said local law enforcement is especially cognizant of those risks because of the state's ongoing battle with opioids.

"There are tens of thousands of containers here and there are hundreds and hundreds of people in and off the port daily," Cummings told ABC11, likening the port to the "front lines" in the war on illegal drugs. "If they want to use this as an avenue to bring in illegal narcotics, then the door is wide open. When we see large volumes of heroin, or fentanyl, marijuana or meth, we realize this isn't coming through the back of a vehicle. Really the only way to get it in that kind of volume is via a ship or an aircraft."
Report a correction or typo
Related topics:
nccrimeiteamsmugglingborder patroldrugs
Copyright © 2021 WTVD-TV. All Rights Reserved.
ITEAM
Citing GenX, EPA announces strategy to combat chemical contamination
3 years later, Hurricane Florence memories linger with flood victim
NC school districts face rising facility costs amid aging buildings
North Carolina's COVID-19 workplace complaints quadrupled in August
TOP STORIES
LATEST: Gov. Cooper, Cohen urge vaccinations, booster shots
Sec. Mandy Cohen, who led state's COVID-19 response, to step down
Duke economists urge calm amid rising inflation
Chris Cuomo suspended from CNN after AG releases documents
Authorities: Student kills 3, wounds 8 at Michigan school
Duke professor highlights importance of global vaccine equity
Show More
Arbery case: Black men feel under suspicion for being Black
Memorial grows where 15-year-old Fayetteville teen was gunned down
FDA health panel endorses Merck COVID-19 pill
Small business owners try to 'bless others' this Giving Tuesday
Tips to avoid holiday social media scams
More TOP STORIES News