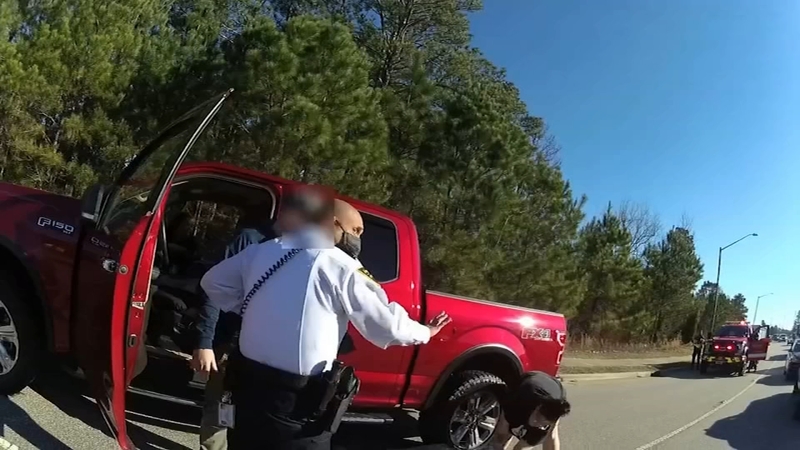 FAYETTEVILLE, N.C. (WTVD) -- The City of Fayetteville released around four minutes of body camera footage from the Fayetteville police officers who responded to the shooting of Jason Walker.

The three videos released on Friday show officers questioning witnesses in the moments following the shooting.

One of the videos shows Walker's shooter, off-duty Cumberland County Sheriff's deputy Jeffery Hash, telling an officer that he was coming down the street when Walker ran across the road so he stopped.

Released bodycam footage shows the moments after the shooting of Jason Walker.

Footage shows Jason Walker's father, Anthony Walker, telling police he saw Jason come out of the yard, run on the street and jump on Hash's car.

"I was trying to get him to come back over here and I called him and I said 'Come back, Jason.' He came out into the street. He was out here in the doggone street and the fella drove up. He jumped up on the guy's hood and the guy jumped out and started shooting," Anthony Walker told an officer.

"He pulled out one of the doggone windshield wipers and he hit the windshield," Anthony Walker said.

Officers question whether Jason Walker had a history of any mental health issues but Anthony Walker doesn't confirm any.

"I don't know if he got onto the car or if he was actually hit. I don't know, but they were in the truck, in the vehicle. I don't understand, they were in a big-ass car, he didn't have anything on him or anything like that," Ricks is heard telling an officer.

A Fayetteville spokesperson said the police department has around 20 hours of body camera footage related to Walker's death. The city has filed a petition with the court to get all the footage released.

Hours after the footage was released, multiple members of the community gathered outside the Cumberland County Sheriff's Office for a memorial and rally for Walker. Friday was the sixth night that activists gathered demanding justice for Walker. Many activists, including Walker's friends, want to see Hash get charged for the shooting.

Allie Brown, a friend of Walker's for more than 15 years, said hearing the news of his death and seeing witnesses' videos was devastating.

"It's crazy to see him lying on the ground like that and you're so used to calling for help and then all of a sudden he's just gone. It's crazy," Brown said. "I want justice because he never should have died like that; in pain."

Brown said Walker was the type of friend who was always there to offer support and encouragement.

She just spoke with him last week to wish him a Happy New Year.

"He's like, 'If nobody ever tells you that I'm proud of you, I'm proud of you,' and he was like, 'Remember, one step at a time,'" Brown remembered. "Sometimes I get discouraged and suddenly he'll always be there to lift me up."

Brown said it's still hard to believe one of her best friends is gone. She remembered Walker for his good heart and willingness to always help. She said the 37-year-old loved the outdoors, fishing and computers.

"Like it's really rare that people don't get to meet real, real best friends, like someone who is really going to love you unconditionally and really going to be there and don't lie," she said. "I'm so blessed that God blessed me with that opportunity to have a best friend. Every time there was something wrong, it's like he was right there."

"Okay, they're gonna release this video. But what are they gonna do about it? Nobody's getting charged with anything and they're just kind of making it seem like Jason was just running in the street like he was some crazy person. No, he's not." Brown said.

Brown is joining local activists in seeking justice and said charges filed against Hash could help bring closure for those who knew and loved Walker.

The decision to file criminal charges rests with the N.C. Conference of District Attorneys, a third-party state agency. However, the agency is waiting for the North Carolina State Bureau of Investigations (SBI) to conclude its investigation before it makes any decisions.