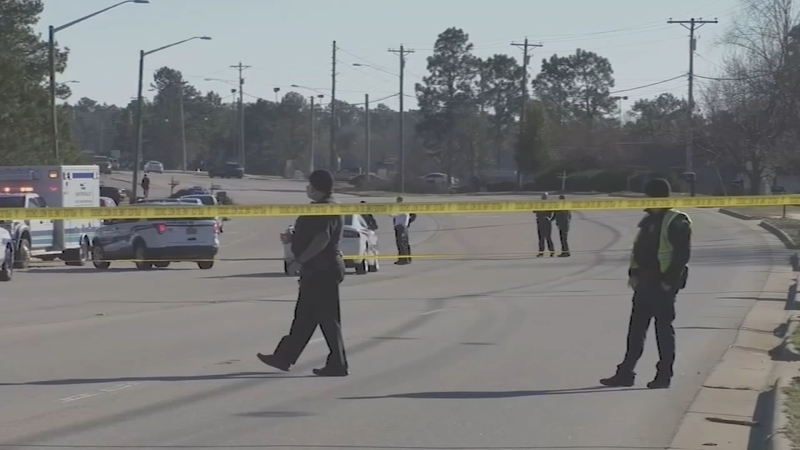 Body cam footage to be released in Jason Walker case

Walker was shot to death by an off-duty Cumberland County deputy, Lt. Jeffrey Hash, on Saturday.

Body camera footage is not considered a public record in North Carolina and can only be released by petitioning the courts to allow it.

The footage from the Fayetteville police officers who responded to the 911 calls will show the moments after Walker's death. While the footage won't show the events that led up to the shooting, it will reveal three statements from witnesses, according to Hawkins' petition filed with the Cumberland County Superior Court.

On Thursday evening, the City of Fayetteville said it has received approval from the Superior Court for the release of body camera footage. The City said a timeline for making the video public could come Friday morning.

Fayetteville Mayor Mitch Colvin said the decision to get the footage released shows the city has nothing to hide.

"This is a matter that is not within the purview of the mayor, the city council, this is a judicial matter, but what we can do is that we can take those steps that will give trust and assurance to the families and to the public, that we are being as transparent as we can," said Colvin.

The city has faced criticism from some activists on the handling of the shooting.

"This horrible thing that happened to Jason is revealing a lot of issues within our police department and with our city council because of exactly how they handled the situation. And so, if we don't want this to happen again to anyone else in this community, we have to make a radical change and real reform when it comes to the way that the city protects its citizens," said Fayetteville activist Mario Benavente.

Community members have being pushing for justice for Jason Walker every night in Fayetteville. Their biggest demand is for his shooter to face charges. pic.twitter.com/oEUFGWoais

In addition to asking for the body camera footage to be released, the Fayetteville Police Department has also asked the State Bureau of Investigations (SBI) to take over the investigation.

On Wednesday, city leaders also reached out to the U.S. Department of Justice (DOJ) to get involved.

"At the end of the day, we want to make sure that we're as transparent as possible. We're bringing third parties in that don't have any local interest," Colvin said.

"We are not too big to understand that when we need a third party or the federal or state government's guidance that we take it into consideration," Colvin said.

Benavente called this the "bare minimum." He and other activists are pushing for charges to be filed against Hash, who said he shot Walker after the man jumped on his truck, broke off his windshield wiper and began to smash it against the windshield. Hash's wife and daughter were inside the truck at the time.

"What would be enough is for them to arrest the shooter. I think that is the next step that we want," said Benavente. "We know that the confidence in the police department and our elected officials is very low because it took a lot of community action for them to even take these basic steps. So, we're keeping a critical eye on that we're continuing to continue to apply pressure until we get justice for Jason."

I spoke with Fayetteville’s mayor today who says he can’t understand why charges haven’t been filed in Jason Walker’s case but urges citizens to allow the process time to work.@ABC11_WTVD pic.twitter.com/rA0LuRF4pK

Colvin told ABC11 that he agrees that charges should be filed.

"I'm not a lawyer. I'm not giving this from a legal professional opinion, but it's hard for me to understand why charges have not been found to this point. But we are asking the public to allow the process to work," he said.

The decision to file charges rests with SBI.

"The mayor or the city council didn't have the ability to charge this off-duty sheriff officer with anything and so the people who can do that have been implemented, they are at the table. And we're just asking people to be patient and let it run out," said Colvin. "There are questions that need to be answered in this and I'm asking those questions on behalf of the citizens of this community."

Benavente said he and other activists are hopeful continual demonstrations will lead to justice and charges for Walker.

Attorney Ben Crump calls for justice for Jason Walker. Crump is representing Walker's family and delivered remarks at a Fayetteville rally on Thursday.

On Thursday night, the Walkers' attorney Ben Crump, held a rally at the family's church.

"We're starting to see that when people come out, when people take action, our elected officials are forced to have to listen and that's what we want for Jason. We want justice for him, and this is the way we're going to get it," Benavente said.