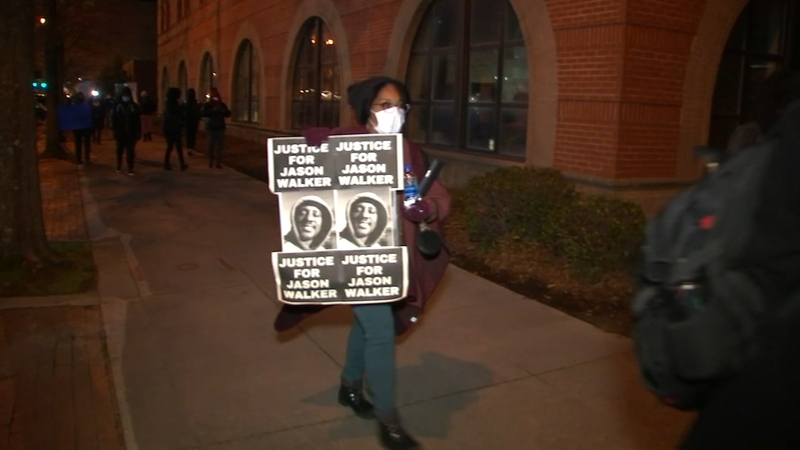 FAYETTEVILLE, N.C. (WTVD) -- The investigation continues into the death of 37-year-old Jason Walker following an incident with an off-duty Cumberland County deputy.

While authorities investigate, others marched and protested for the second day, demanding answers in Walker's death.

"We need to let these elected officials know, we need to let the chief of police, the sheriff know that we're standing together in solidarity, that this is not OK -- that this happened In our own backyard," said Myah Warren, an activist and march organizer. "So, for us not to make noise when we made noise for George Floyd for Breonna Taylor it would be hypocritical."

You could hear demonstrators tonight inside the @CityOfFayNC council meeting. Inside @FayettevillePD Chief said the @SBI1937 is handling the criminal part of this investigation. @FBI COULD be called in if there’s found to be civil rights violations #abc11 pic.twitter.com/A8sQC5WqxC

Fayetteville Mayor Mitch Colvin said people have the right to express themselves but stressed patience and allowing the process to work.

"We ask people to give some patience and calmness," Colvin said. "Let us be there for the families in the meantime. I'm sure they want justice, they want answers, just like we want the same thing, and we ask people to remain calm. We'll get a lot more accomplished by doing it the right way through the system."

Demonstrators are listening to @CityOfFayNC council meeting outside the transit center but they’re drowning it out with their chants #abc11 pic.twitter.com/0TUxhpG09p

Colvin said there is still a lot to learn about the circumstances but said "those bad actors will be held accountable."

Just before noon on Monday, the Cumberland County Sheriff's Office identified the off-duty deputy involved in the shooting as Jeffrey Hash. Hash has been with the department since 2005; he is on administrative leave pending the investigation.

The shooting happened Saturday on Bingham Drive in Fayetteville.

The State Bureau of Investigation is looking into the death of Jason Walker following an incident with an off-duty Cumberland County deputy.

The truck driver, later identified as Hash, shot and killed Walker before calling 911. Police said the bullet that Hash fired did not go through the windshield. Authorities seized Hash's personal firearm after the deadly incident.

On Sunday, Fayetteville Police Chief Gina Hawkins held a news conference to discuss the situation. On the same day, Walker's friends and family organized a march to City Hall in a push to get answers.

Hawkins said the truck's "black box," or on-board computer, showed it did not register any impact to the vehicle by "any person or thing."

According to Hawkins, the lone eyewitness who has come forward so far told Fayetteville Police Department that Walker was not struck by the vehicle.

Investigators noted that a windshield wiper was torn off and the metal portion was used to break the windshield of the truck in several places.

Walker's family and friends said they don't believe the narrative that is being reported.

"He wasn't the kind of guy you know to stir up violence," one relative told ABC11. "He was a very humble soul. Everyone that knows him, knows him to have a gentle heart -- soft-spoken, well-mannered, hardworking individual. He had an incredible sense of humor."

Another protest is planned for Monday evening in downtown Fayetteville.

"I don't believe he threw himself on top of a truck," said a cousin of Walker's. "I believe he wanted to live. I just want justice for my cousin because it's not adding up."

Walker leaves behind a son.

The FBI is aware of the case but is not part of the active investigation.

"We are aware of the shooting death investigation in Fayetteville and are in regular contact with local and state authorities," the FBI's Shelley Lynch told ABC11. "If, in the course of the North Carolina SBI investigation, information comes to light of a potential federal violation, the FBI is prepared to investigate."

Meanwhile, the SBI continues to ask that anyone who witnessed the incident, knows of anyone who witnessed the incident or has video or audio footage before, during or after the incident, contact the SBI Southeastern District office at (910) 778-5724 during business hours or call (800) 334-3000 after business hours.
Report a correction or typo
Related topics:
fayettevilledeadly shootingprotestman killedman shotdeputy involved shootingdeath investigation
Copyright © 2022 WTVD-TV. All Rights Reserved.
TOP STORIES
Winter storm moves out, refreeze possible overnight
NCSHP reports 200 crashes statewide, urges drivers to stay home
Monday events canceled, postponed due to winter weather
Why do we get freezing rain instead of snow or sleet?
FBI identifies hostage-taker at Texas synagogue
How to drive on snow, ice and get out of a skid
Expect more worrisome COVID variants after omicron, scientists say
Show More
After Biden's first year, the virus and disunity rage on
Novak Djokovic leaves Australia after court rejects visa challenge
Ukraine claims Russia behind cyberattack in 'hybrid war'
Hostages in N. Texas synagogue 'out alive and safe,' Gov. Abbott says
Man shot, killed by officer at Duke University Hospital
More TOP STORIES News