On Jordan Staal and what it means to be a dad, and captain 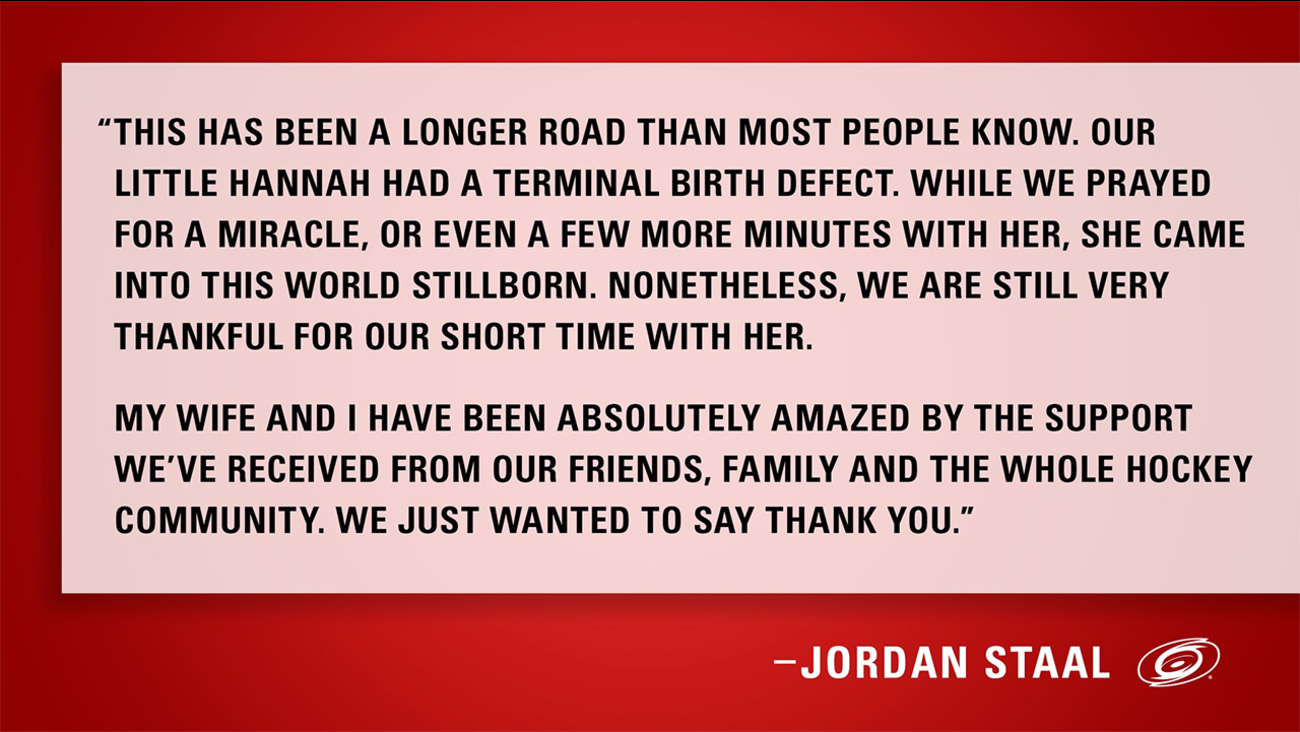 RALEIGH, NC (WTVD) -- It's an incomprehensible pain to even imagine, never mind being the ones to have to live it.

Jordan Staal and his wife, Heather, lost their daughter last Friday. Little Hannah was stillborn. That would have been bad enough, but Wednesday, the couple released a statement outlining the extent of the struggle they've been living through:

This was no immediate tragedy. It was drawn out. The surefire shock of the initial diagnosis. The hope against hope that a miracle would happen, some divine intervention. Then, finally, the realization that their little girl was not going to make it.

I well up even typing these words. Imagine again that you are living it. This every-day nightmare. Try to even comprehend being Heather, carrying around this precious little person, wondering and deep down probably knowing her fate.

Hannah was going to be the third Staal girl, a new little sister for 3-year-old Abigail and 2-year-old Lilah, who were surely eagerly anticipating her arrival. Now, Jordan and Heather are parents, trying their best to explain to toddlers that their little sister isn't coming home after all.

Now think of Jordan Staal dealing with this reality all while coping with the demands and expectations of co-captaining a professional hockey team. Going to practice, playing games. Many times, he was surely in a daze. How could he not be? Put yourself in his place, answering questions after whatever win or loss and trying to place some import on the whims of a power play or what's wrong with this? Or how much do these upcoming games mean?

Still, there he was, after every game, good or bad, answering those questions as best he could. That's a pro, man. That's a captain. And no offense to Justin Faulk, that's a captain who shouldn't have some half-cocked "Co-" next to the title.

I won't pretend to know Jordan beyond the locker room interactions we've had. I can't speak to how he'll handle this at home, as a dad who lost a daughter. As a husband coping with his wife. What I do know is that through this all, he kept showing up to play hockey to the best of his ability, kept being accountable, kept being at his locker afterward.