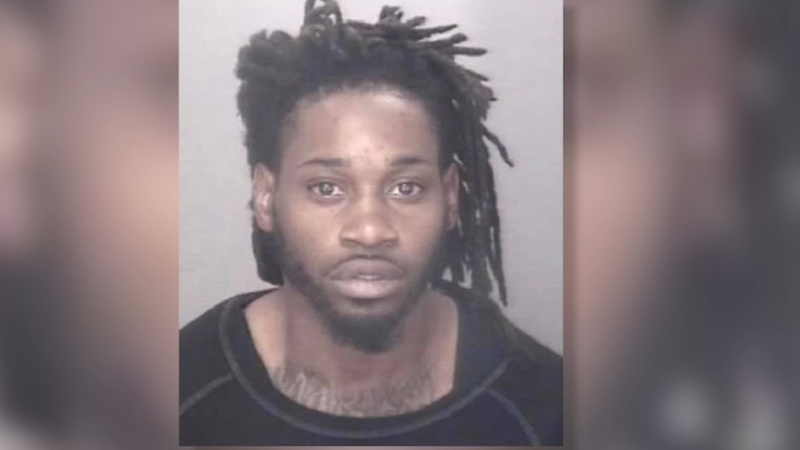 Arrest made in Lumberton road rage killing of Julie Eberly

LUMBERTON, N.C. (WTVD) -- A 29-year-old man is behind bars accused of shooting and killing a mother of six while driving down Interstate 95 in Lumberton.

Julie Eberly, 47, was riding in the passenger seat with her husband on March 25. The couple, who are from Pennsylvania, were on their way to the beach to celebrate their wedding anniversary.

That driver got back on the road, went to pass the Eberlys and opened fire.

"I saw in my mirror that he was passing us to the right and gunshots were fired, our car was hit. My wife yelled my name. I asked if she was hit and she said 'yes,'" Ryan Eberly recalled.

Robeson County Sheriff Bunis Wilkins talks about the arrest of the suspect in the Lumberton road rage shooting.

Robeson County Sheriff's Office announced Thursday that the driver of the car was Dejywan R. Floyd, 29.

Floyd was arrested without conflict just after midnight Thursday morning at Parkview Apartments in Lumberton. Coincidentally, the arrest came hours before Julie's funeral.

"We were actually onto him for several hours, he didn't know that, but we were onto him," Sheriff Bunis Wilkins said.

He's charged with first-degree murder and discharging a weapon into an occupied property. He's being held in Robeson County Detention Center without bond.

"The arrest of Floyd is the direct result of law enforcement agencies and the community working together," Wilkins said. "The surveillance footage provided to investigators by dozens of cooperating businesses and residents were critical elements in the tracking of Floyd's path in Cumberland County prior to the shooting and throughout Lumberton and beyond after the shooting. Regardless of the circumstances, no one deserved to be murdered while traveling our nation's highways."

Wilkins said the $20,000 reward will be going to one person who helped authorities zero in on Floyd's location.