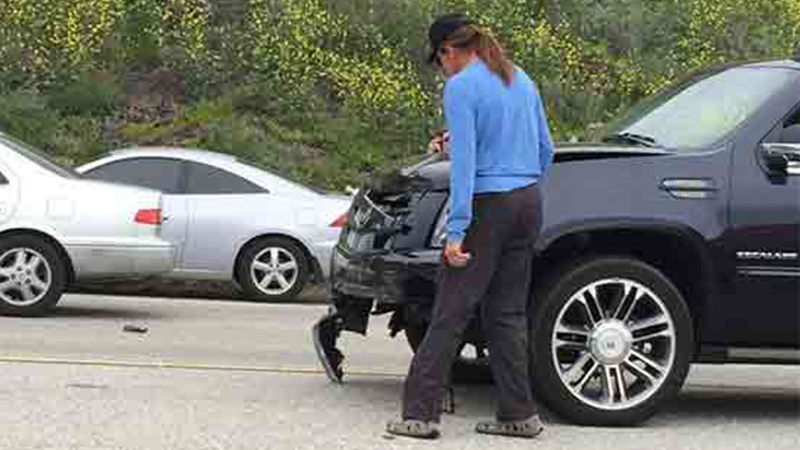 MALIBU, Calif. -- Bruce Jenner was not texting while driving when he got into a chain-reaction crash in Malibu that killed an elderly woman, his publicist, Alan Nierob, said, adding that Jenner will provide his cellphone records if requested by investigators.

"The evidence will show that Bruce was not texting at the time of the accident," Nierob said.

Paparazzi were following the former U.S. Olympian, but were not involved in the crash, Los Angeles County sheriff's officials said Sunday.

Jenner told sheriff's deputies that the paparazzi was following him, but he was not trying to evade them, Sgt. Phillip Brooks said. Jenner did not indicate at the scene that he felt the paparazzi was at fault for the incident, Brooks added.

"As far as we know, they had nothing to do with the crash," Brooks said.

Jenner said in a statement Sunday that he will cooperate with the probe "in every way possible."

"My heartfelt and deepest sympathies go out to the family and loved ones, and to all of those who were involved or injured in this terrible accident," the statement said. "It is a devastating tragedy and I cannot pretend to imagine what this family is going through at this time. I am praying for them."

Meanwhile, paparazzi photos posted show Jenner with his cellphone. Deputies were investigating to see if the photos were taken before the crash occurred, sheriff's deputies said.

Investigators may look into whether texting was involved. They declined to comment on whether they will check Jenner's cellphone records. The information gleaned from those records could help inform prosecutors, if they were to consider charges against the drivers involved.

However, Brooks said it is difficult to determine if a driver was texting at the exact time of a collision. Investigators will look at signs of driver behavior such as multiple texts that span a period of time leading up to, or including, the crash, Brooks said.

"The problem is pinpointing the time of the accident," he said. "If the accident occurred at 12:05 and 30 seconds, or 12:05 and 40 seconds, if you hung up before that, that's useless information."

All vehicles will also be inspected to see if they were mechanically sound.

Authorities said the crash occurred after a Prius either slowed or came to a stop in the northbound lanes of Pacific Coast Highway for unknown reasons. An elderly woman, identified as Kim Howe, 69, of Calabasas, driving a white Lexus then struck the Prius. Jenner's Cadillac Escalade, which was towing a trailer, then rear-ended Howe, which pushed her car into southbound lanes, where it collided head-on with a Hummer.

Sheriff's say they have not yet determined who was at fault.

"Deputies on the scene contacted the driver of the Prius. She made statements that she slowed or stopped. We're not sure if she was slowing for traffic at the signal that was down the street a little ways or if she was stopping or slowing for another reason," Brooks said.

The investigation into Saturday's chain-reaction crash that killed an elderly woman and injured seven others was ongoing.