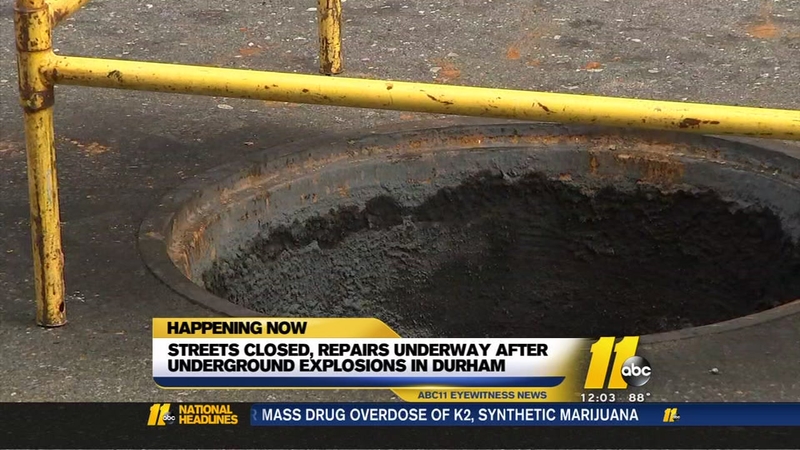 DURHAM (WTVD) -- Many downtown Durham streets remain closed as authorities and power crews work around the clock following an explosion that forced some manhole covers to blow off late Tuesday night.

Something made at least 3 Durham manhole covers move overnight. As repair crews work, we'll update you on #abc11. pic.twitter.com/acExAdXZyI

That fire created pressure, he said, as the space underground is sealed. The gas expanded because of the heat and the covers couldn't handle the pressure.

Smoke could be seen billowing from at least one manhole overnight.

Crews from Duke Energy at work after covers of manholes took off overnight. #durhamatnight #abc11 https://t.co/GQxvLUd5aI

No one was hurt in the five block area.

However, downtown Durham resident John Warsila said he did a double take when he realized that shortly after his walk along Chapel Hill Street, two manhole covers blasted off from the asphalt.

"I'm glad we're not dead," he said. "We were standing right there!"

A guest at the nearby Marriott said it sounded like an exploding bomb, but Warsila said he heard nothing during his stroll.

"Yeah, no sound, just smoke," he said. "It's kind of scary, now that I look at this" - cracks in a glass window and the metal trim blown off of a building by the blast.

The building's owner, Howard Brown with Self Help, said he was relieved no one was hurt.

"It was a lot of force coming off the manhole cover," Brown said. "Thank God no one was walking by, because it could have thrown them right through the glass.

It was also a lot less damage than he said he anticipated.

"I think this is repairable, and we'll be back in business as soon as we get the power back on," Brown said.

Duke Energy crews spent much of overnight and Wednesday morning clearing water and soot from areas below the street, after firefighters identified a possible cause.

"So they're going to have to replace the wire under there," Brown said. "So it could have been the wire, the heat the from the transformer built up, and the gases could have done something, built up underground and blew off the manhole covers."

Some Duke Energy customers in the area had limited power around noon Wednesday.

But one Chapel Hill Street businessman said the wait's worth it.

"That's good, that they're on top of it," business owner Pearce McKoy said. "But yeah, I'm sure that everybody will be concerned, to make sure our safety downtown will be in good standing."