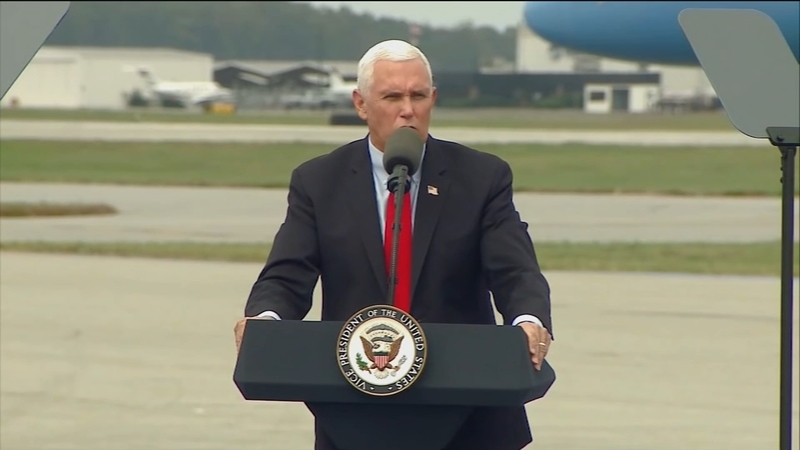 He talked about the confirmation of Judge Amy Coney Barrett to the Supreme Court.

"Trump has appointed more than 200 conservative judges to uphold the constitution--the freedom of speech, freedom of religion and the second amendment right to keep and bear arms--and including Justice Amy Coney Barrett to the Supreme Court," Pence said to the crowd at Piedmont Triad International Airport.

Pence also stuck to other campaign messages. He told the crowd under President Donald Trump, the economy was booming and unemployment was low before COVID-19.

He called the Affordable Care Act--more commonly known as "Obamacare"--a disaster, and claimed Trump's health plan will be better, but didn't provide specifics.

President Trump was in Lumberton on Saturday, speaking at the Robeson County Fairgrounds. His senior advisor and daughter-in-law, Lara Trump, is scheduled to be in Selma for a 'Women for Trump' event on Wednesday night.

The closely scheduled visits are no coincidence: with just seven days until the election, the race for the presidency is still tight in North Carolina.

A recent ABC News/Washington Post poll illustrated how tight the race was in North Carolina, as it found democratic presidential nominee Joe Biden with 49% support and President Trump with 48% support.

Pence encouraged his supporters to vote early before Saturday's deadline.

Recently, at least five of Pence's aides tested positive for COVID-19. That did not stop his campaign from making a stop in Kinston for a 'Make America Great Again' rally over the weekend.

Pence tested negative and decided to keep traveling after consulting White House medical personnel.
But Democrats said Pence should be in quarantine and not on the campaign trail.

Today the Biden campaign released a statement calling his visit a blatant disregard for the safety of North Carolinians:

"Today, Vice President Pence is traveling to North Carolina for the second time since we learned that five of his staff members, including people he has regular contact with, tested positive for COVID-19

"As President and Vice President, Joe Biden and Kamala Harris will tackle this pandemic, take care of our working families, and build our economy back better than before."

Pence, who leads the White House Coronavirus Task Force, told the Greensboro crowd a vaccine is on the way.

"We are on track to have the first safe and effective coronavirus vaccine by the end of this year."

After his Greensboro rally, Pence flew to Greenville, S.C. for another planned event. He is expected to speak in Wilmington, N.C. on Tuesday evening.