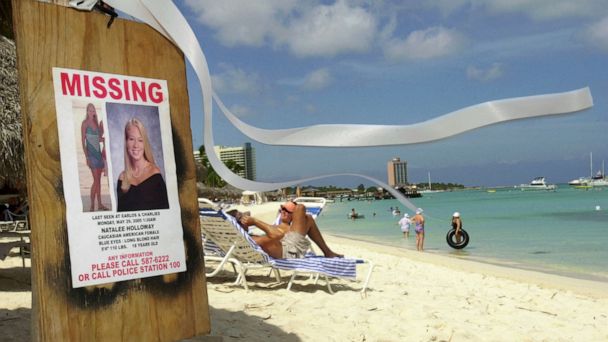 May 30, 2005, was the last day of Alabama teenager Natalee Holloway's graduation trip to Aruba with her high school senior class. She didn't return to her hotel and was never seen again.

Since that day, the details surrounding Holloway's disappearance have captured the media spotlight. Now, nearly 15 years after she vanished, there are still questions about what happened to her.

The following is a timeline of the investigation:

Holloway, 18, did not return to her Aruba hotel after a night out at a club called Carlos'n Charlie's in Oranjestad, Aruba.

She was last seen driving off in a gray Honda with a group of local young men, including the man who would become the main suspect in her disappearance, Joran van der Sloot.

Van der Sloot and two brothers, Deepak and Satish Kalpoe, were arrested on suspicion of kidnapping and murder in June 2005.

By September of that year, all three were released without charges.

Van der Sloot and the Kalpoe brothers were arrested again in November 2007.

By December of that year, all three were released without charges and the case was reportedly declared closed.

He then fled across the border to Chile.

Van der Sloot was arrested in Chile and sent back to Peru to face charges for Flores' murder.

Van der Sloot was indicted in an Alabama U.S. district court on federal charges of wire fraud and extortion. He is alleged to have demanded $250,000 from Beth Holloway, Natalee's mother, to provide her with the location of her daughter's remains.

"He extorted, or attempted to extort, someone -- an individual -- in exchange for the location of Natalee Holloway's remains and information about her death," said Peggy Sanford, spokeswoman for the U.S. Attorney's Office in Birmingham.

Peruvian officials declined to extradite van der Sloot to the U.S. for these charges until he faced justice in Peru for Flores' murder.

Just one day after Natalee Holloway was declared dead, van der Sloot was sentenced to 28 years in prison for killing Flores in Peru.

"Yes, I want to plead guilty. From the first moment, I wanted to confess sincerely," van der Sloot said in court. "I truly am sorry for this act. I feel very bad."

"Every time I looked out at the ocean, I couldn't handle it... It just disturbed me greatly. Because it made me feel as if I was never going to get an answer as to what happened to Natalee," she said. "But I feel like I have accomplished a huge feat... I can come back now to Aruba. I can get in the water... It feels great."

"Throughout the years the PPO has ordered new investigations in this case. And we will do so in the future if new information give rise to do so," Klaver said.

Klaver also said "the cases against Joran van der Sloot and the Kalpoe brothers have been dismissed. Only new facts and circumstances unknown at the moment of the dismissal can lead to reopening their cases."

Journalist Greta Van Susteren, who interviewed van der Sloot in 2008, says he still emails her from prison in Peru. He will be eligible for parole before his sentence is finished.

Since being sentenced, van der Sloot has married a Peruvian woman. They have a daughter together.

In 2014, it was announced that van der Sloot would be extradited to the U.S. after he finishes his sentence in Peru.