Cooper vetoes bill that would push NC primary to June 7 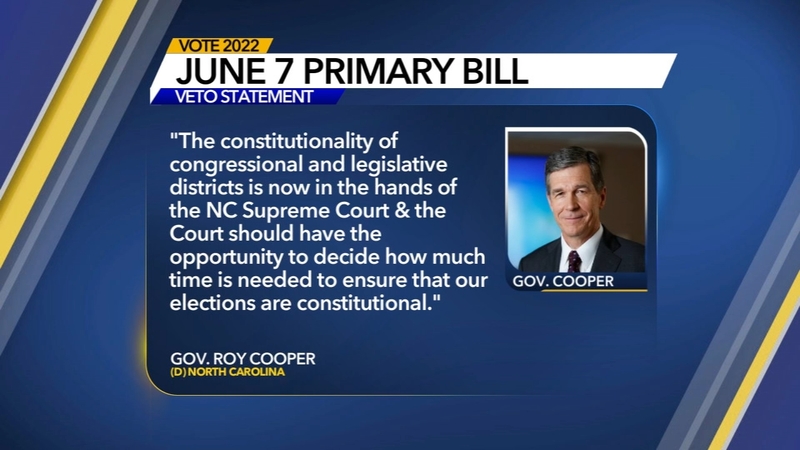 Cooper vetoes bill that would push NC primary to June 7

RALEIGH, N.C. -- Gov. Roy Cooper refused on Friday to delay North Carolina's primaries by another three weeks to June, vetoing a measure that Republican legislators said would allow them more time to redraw their redistricting plans if the state Supreme Court strikes down boundaries.

The Democratic governor had said last week before the General Assembly approved the legislation that it was a bad idea for lawmakers to interfere as the state's highest court considers litigation challenging congressional and legislative boundaries.

The justices last month already postponed primary elections originally set for March 8 until May 17 to allow time for them to hear the lawsuits claiming that illegal partisan gerrymandering and the dilution of Black voting power favor Republicans. The left-leaning state Supreme Court plans to hear oral arguments in the case on Wednesday.

Cooper, who with Attorney General Josh Stein filed a friend-of-the-court brief urging the justices to strike down the new maps, wrote in his veto message that Republicans were seeking to control the election timeline.

"This bill is an additional attempt by Republican legislators to control the election timeline and undermine the voting process," Cooper said. "The constitutionality of congressional and legislative districts is now in the hands of the North Carolina Supreme Court and the Court should have the opportunity to decide how much time is needed to ensure that our elections are constitutional."

The bill was approved on party lines by Republicans, who said a further primary delay to June 7 was needed to reduce confusion as the state awaits the court's decision. With the GOP lacking veto-proof majorities in the House and Senate, the chances of an override are slim.

North Carolina House Speaker Tim Moore, a Republican, accused Cooper of interfering with a reasonable delay that was meant to ensure the map redrawing is thorough and constitutional.

"House Bill 605 is a reasonable measure taken by the legislature to ensure a thorough and constitutional process. Unfortunately, Governor Cooper's veto undermines that process in the name of politics," Moore said. "Furthermore, during his time as Senate Redistricting Chair, Cooper presided over some of the most tortured and gerrymandered maps in state history. Now, he wants to sow chaos and confusion in the hopes that the Supreme Court will usurp the constitutional duty of the General Assembly to the benefit of his Democrat allies."

The State Board of Elections has said it needs final maps by Feb. 18 in order to keep the May primary on schedule. Republicans note a state law that requires the General Assembly to be given at least two weeks to redraw the maps if they are struck down before judges could step in and draw their own. Registered Democrats hold a 4-3 majority on the Supreme Court.

"This commonsense legislation alleviated an unnecessarily constricted timeline for candidate filing and initiating the election process," said Sen. Warren Daniel, R-Burke. "It also made necessary changes to the municipal election timeline requested by the State Board of Elections. The party-line vote on House Bill 605 and Gov. Cooper's veto lay bare what redistricting litigation really is - nothing more than a pure political power play."

Cooper and Stein said in their court brief that the justices should decide to delay the primary again if it means ensuring "future elections are held under constitutional maps." But one group of plaintiffs, led by the North Carolina League of Conservation Voters, said justices have the authority to shorten or eliminate the two-week period. Lawyers for others who sued said the justices should place the remapping in the hands of a third-party expert.

The vetoed bill would have extended the primary date for the U.S. Senate and House, the legislature and scores of judicial and local positions. Primary runoffs would be held either July 26 or Aug. 16, with the latter date used statewide should a second-place primary finisher for any federal post ask for a runoff.

The redistricting litigation alleges Republican legislators violated the state constitution by drawing lines that likely will result in the GOP winning 10 of the state's 14 U.S. House seats and preserving state House and Senate majorities in almost any political environment. In contrast, statewide elections are usually closely divided.