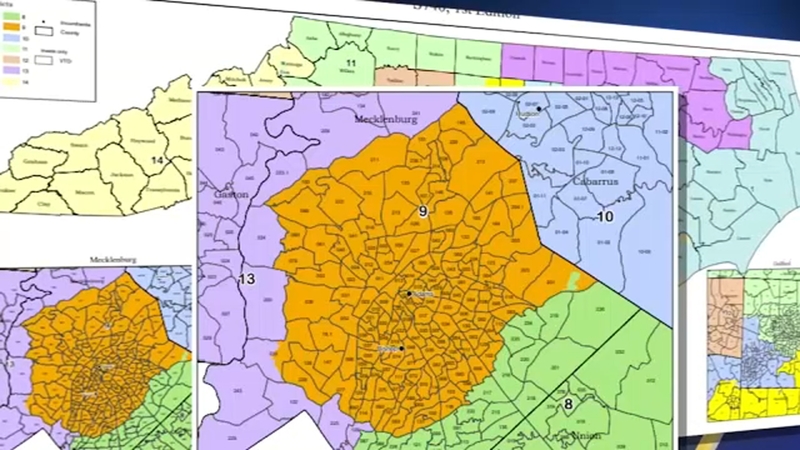 "Now that a bipartisan court unanimously validated the maps, the people of our state should be able to move on with the 2022 electoral process,". said Sen. Warren Daniel, a Republican who co-chairs the Senate Redistricting Committee.

However, the saga is far from over. An appeal to the state Supreme Court is likely.

"I am disappointed by the three-judge panel's decision to uphold the partisanly gerrymandered maps," said Bobbie Richardson, NC Democratic Party Chair. "The evidence presented demonstrates that Republicans lied to their colleagues when they promised a fair and transparent redistricting process. They cheated by using secret maps and closed-door strategy sessions, then destroyed the maps they used. They are trying to steal seats through illegal partisan gerrymandering and are choosing to proceed with costly litigation that hardworking taxpayers will pay for."

The Wake County Superior Court panel disagreed. In their decision, the judges denied the plaintiffs' request for Declaratory Judgement and for Permanent Injunctive Relief.

The Wake County Democratic Party told ABC11 on Tuesday evening that it "vehemently disagrees" with the Appeals Court decision.

The WCDP said it strongly supports an appeal.

"Again, NCGOP leaders demonstrate they cannot be trusted to develop fair maps. Wake County Democratic Party Chair Kevyn Creech said. "They engaged in 'transparency theatre,' ignoring calls from voters statewide and upstanding electoral organizations like the Princeton Gerrymandering Project to do the right thing. In short, the NCGOP is not interested in protecting NC voters. It seems North Carolina is heading toward another 10 years of expensive lawsuits - paid for by NC taxpayers - in this ongoing war between voter suppression and voters' right to choose their representation."

The panel said the filing period for 2022 elections will resume at 8 a.m. on Feb. 24 and continue through noon on March 4.

County and municipal candidate filing also will resume on Feb. 24 and take place at the county board of elections offices, the State Board of Elections said.

"State Board of Elections staff will immediately begin preparing for the continuation of the candidate filing period, including securing a location to ensure the health and safety of staff and candidates," said Karen Brinson Bell, State Board executive director. "We will provide all details to the public as soon as possible at NCSBE.gov and through an announcement distributed to the media."

Just weeks after North Carolina's Court of Appeals undid an order that temporarily blocked candidates from filing for legislative seats, candidates and other insiders awaited this decision on the future of the legislative maps.

"We know that the state Supreme Court has decided in the past that partisan gerrymandering violates the state constitution," said congressional candidate Nathan Click, a Democrat. "And I can't think of a situation where we get more Democrat voters in a state, but less Democrat representation for the state. That math just doesn't work."

Previously, the primaries were scheduled for March and have since been pushed to May.

"We know that no matter what happens, this case is going to get appealed to the state Supreme Court," Click said.

Daniel suggested a Supreme Court decision would likely be tinged with conflict.

"Eric Holder's organization donated $250,000 to elect Justice Anita Earls, who has not yet recused herself even though this case is funded by that same organization -- her largest campaign backer," Daniel said.

North Carolina House Speaker Tim Moore, R-Cleveland, added: "I am pleased the trial court has ruled in our favor, upholding the maps drawn by the General Assembly in the most transparent process in North Carolina history," . "Free and fair elections are the result of an open and honest process. The General Assembly's maps were drawn in the light of day, after months of public comment and feedback. Unfortunately, Democrat plaintiffs refuse to hold themselves to this standard. Their own proposed maps were drawn in secret, implementing feedback not from voters themselves, but from political consultants paid for by Eric Holder."

Richardson said Democrats will continue to challenge the Republican-drawn maps.

"Throughout this process, I have said that voters ought to be able to select the individuals that represent them, not the other way around," Richardson said. "This is not the end of the fight for fair and transparent maps that reflect the diversity of our state."

However it plays out, Click told ABC11 in December that "the most important thing is voters this cycle get fair maps."