Regardless of who's more popular, Dale Earnhardt Jr. 'big fan' of Cam Newton 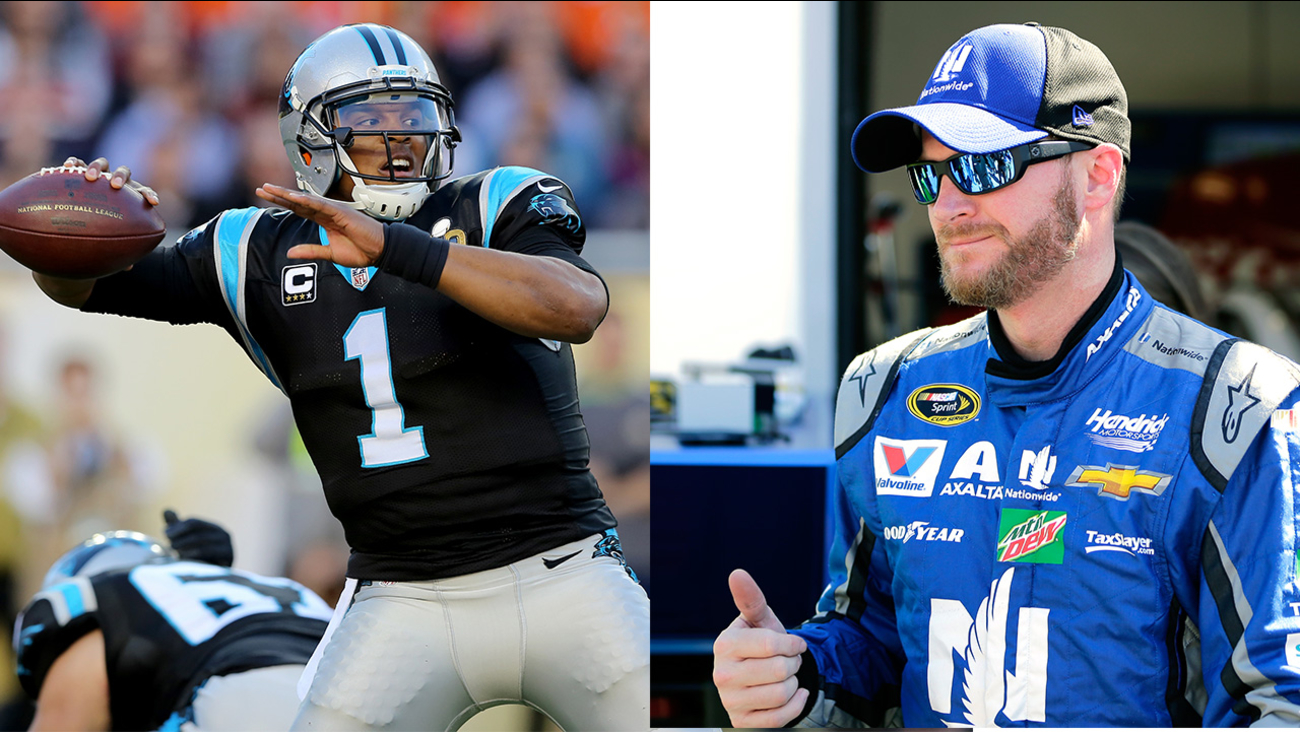 CHARLOTTE -- Dale Earnhardt Jr. indisputably is the most popular driver in NASCAR, having won the award voted on by fans 13 consecutive seasons.

But is he the most popular athlete in his hometown of Charlotte, N.C. (He's technically from nearby Mooresville, but he also calls Charlotte home)?

There have been no polls or votes, so there's no way to officially say.

Newton wasn't even in the top 20 (22nd) in NFL merchandise sales in January, when the last figures were released by NFL Players Inc. He wasn't even first among Panthers, trailing teammate Luke Kuechly at No. 18.

But that's apples and oranges.

And as Earnhardt reminded, he and the reigning NFL MVP aren't in a popularity competition.

"But he could and can and maybe he is [the most popular in Charlotte]," Earnhardt recently told me at an event in downtown Charlotte. "If he goes on to win the Super Bowl, certainly. Without a doubt, he'll be one of the biggest things in this city in a long, long time."

Earnhardt hasn't met Newton, but he hopes to soon. An avid Washington Redskins fan, Earnhardt follows the Panthers and likes when they have success as they did this past season in reaching the Super Bowl.

"Because it's good for the city, so I pull for them," Earnhardt said.

Earnhardt says Newton is good for the city, as well.

"I've seen a lot of things he's done off the field," he said. "He's certainly going above and beyond within the community, which I think is amazing.

"A lot of the things he did on his own."

Earnhardt was referring to times such as last year when Newton crashed a Halloween block party thrown for 10-year-old boy battling cancer. Newton heard of Elijah Aschbrenner's story and showed up with an ice cream truck.

Newton wore a wristband he got during that visit after learning that Elijah died in November.

Newton's work as a community advocate was honored by the "Big Brothers Big Sisters of New City" on Monday.

"It seems like he's really wrapping his arms around the community and becoming a big part of it," Earnhardt said. "And being a big influence can only improve things for the city.

"The city needs guys like that. Your major sports teams, you want to have these icons that the city really falls in love with. He's becoming that guy."

Regardless of where Newton ranks among the fans in Charlotte, he's got a big fan in Earnhardt.

"If he can do great things for this city, I'm all for it," he said. "I'm a big fan of his. In the past year, it's a completely different Cam as far as what he's done off the field, how he's participated and been a big part of people's lives around here.