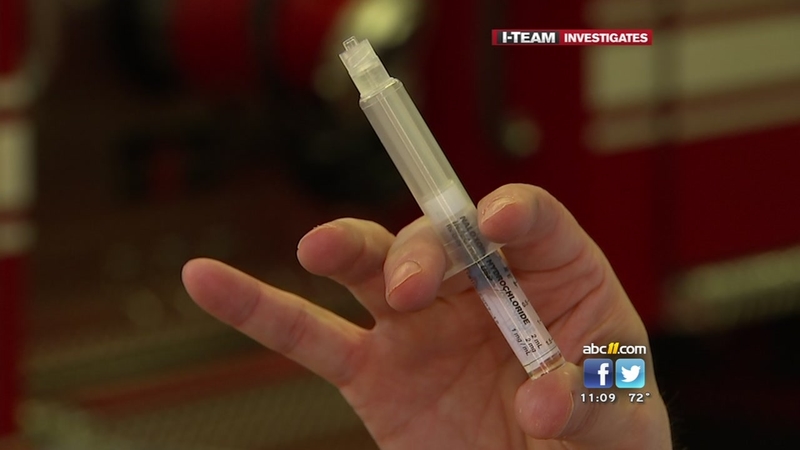 DURHAM, North Carolina (WTVD) -- It's being considered a game changer: a police officer's life in jeopardy from an accidental narcotics overdose.

"I was like 'Wow, never even thought that could happen,'" Battalion Chief David Swain of the Durham Fire Department, told ABC11. "A lot of times we're not dealing with stuff that's out in the open. We're dealing with syringes either stuck in people's arms or we can see the syringe. We can see the needle and we know to stay away from it."

Swain is the Emergency Medical Services (EMS) Coordinator for the DFD, and told the ABC11 I-Team he considers opioid overdoses an "epidemic."

All Durham EMS crews carry naloxone, or Narcan, which is a life-saving treatment for opioid overdoses. The crews all wear gloves to protect themselves from exposure to blood and liquid forms of the drugs.

"Moving a patient and coming in contact with something that spilled. Moving from an unsafe space to a safe place, moving them from where we found them to a stretcher to the medic truck," Swain said.

The narrative changed, however, last week, when an East Liverpool, Ohio, police came in to contact with a powder form of the narcotic Fentanyl.

Investigators say the officer saw white residue on his partner's uniform after a drug bust and tried to brush it off. The officer, Patrolman Chris Green, collapsed an hour later and was rushed to a hospital.

Swain said crews must now be cognizant to exposure to powder forms of synthetic drugs, and EMTs may need to cover up more skin when they respond to incidents of overdoses.