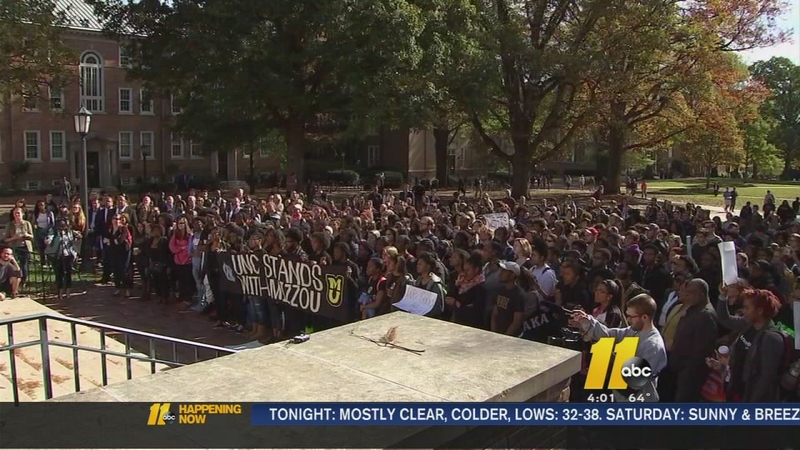 CHAPEL HILL, DURHAM (WTVD) -- Both the University of North Carolina-Chapel Hill and Duke University have joined in on the now national conversation on race relations on college campuses.

On Friday, UNC students rallied in solidarity with students at the University of Missouri. The rally came in response to African-American students threatened after the school's president resigned. His resignation came amid complaints that he ignored racism issues.

Some Mizzou students have complained for months of racial slurs. Before the president resigned, at least 30 African-American football players announced they would not participate in team activities until he stepped down or was removed. As tensions escalate, schools across the country have responded with a show of solidarity.

Students at UNC rallied outside of South Building Friday. Chancellor Carol Folt was outside on the quad listening to students' concerns. As much as the rally was organized to stand in solidarity with the University of Missouri, it was also a time to air grievances over current race relations on UNC's campus.

"It is our duty to fight!" Rally to #StandWithMizzou begins outside South Building @UNC #ABC11Eyewitness pic.twitter.com/VDcY1Ez0I3

Students in the front row held a banner that read "UNC Stands with Mizzou." Leaders from groups like the Silent Sam Coalition and UNC's Black Student Movement have been calling for administrators to stop the dialogue over issues that have caused racial tension here on their campus and to take action. The BSM has led the charge to remove the Silent Sam statue that depicts a confederate soldier from UNC's campus.

These student leaders also called on their peers, telling them that waiting to unite until times of protest isn't good enough if they want to be serious about creating an inclusive university.

"You must be a concerned student. I look around my campus, dining halls and classrooms, and see unconcerned students who do not bat an eye, or cringe at the sight of oppression of my people," a student said to the crowd.

Chancellor Folt sent an email to the Carolina community late Thursday afternoon letting everyone know they will be holding a town hall meeting on Nov. 19. All students, faculty, and staff are invited to talk about current race relations and the issues that are holding UNC back from creating an inclusive university.

A meeting on racism also took place Friday at Duke University. Just ahead of the meeting, "Black Lives Matter" was painted on the James B. Duke statue that sits in front of Duke Chapel.

The James B. Duke statue in front of Duke University's Chapel was vandalized Friday

The forum came after several recent incidents on campus including a noose hanging from a tree last year, graffiti on black lives matter poster, and a homophobic death threat written on the wall of a dorm just last week.

Students and the administrators had an intense candid discussion. The students not only voiced their concerns but also briefly protested.

A group of student activists took over the stage before the discussion got underway. They were greeted with applause as they chanted and invited the campus back next week for another discussion.

The university says it will create a new task force focused on student conduct that may involve bias or hate.

It's also expanding a provost position dedicated to faculty culture issues and diversity. Duke says it wants an open and honest dialogue with the campus.