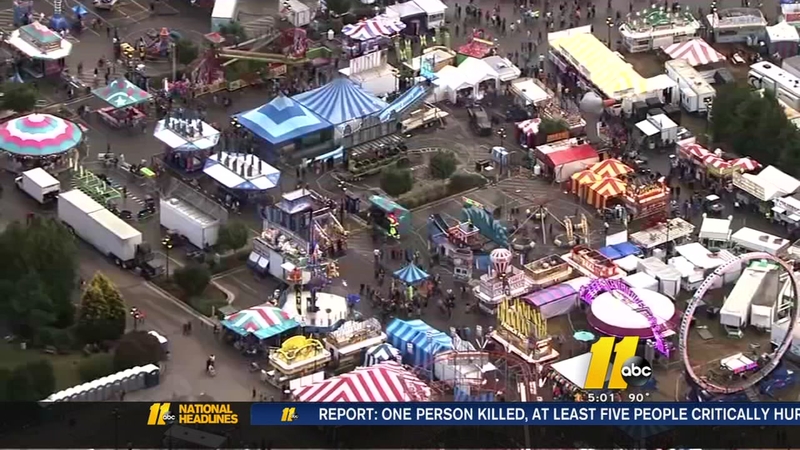 RALEIGH, North Carolina (WTVD) -- The North Carolina Department of Labor tells ABC11 that they will issue a moratorium on all KMG Fire Ball rides in the state after Wednesday's Ohio State Fair tragedy.

A swinging and spinning amusement park ride called the Fire Ball malfunctioned and broke apart on the opening day of the fair, hurling people through the air, killing at least one and injuring seven others.

The North Carolina Department of Labor said the exact ride was in operation in the Charlotte area just 2 and a half months ago.

NC Dept of Labor says this exact ride was in operation in Charlotte area 2 1/2 mos ago. #ABC11 pic.twitter.com/SYDxF0bovY

On Wednesday evening, dramatic video captured by a bystander at the Ohio State Fair showed the Fire Ball ride swinging back and forth like a pendulum and spinning in the air when it crashes into something and part of the ride flies off. Screams are heard as passengers are thrown to the ground.

The company providing rides at the fair this year described the Fire Ball as an "aggressive thrill" ride.

On its website, Amusements of America said that since its debut in 2002, the Fire Ball, which was manufactured by KMG, had become "one of the most popular thrill rides on the AOA Midway." The company's description of the ride said it swings riders 40 feet (12 meters) above the midway while spinning them at 13 revolutions per minute.

Ride inspectors did not notice anything out of the ordinary when they conducted their inspections and cleared the Fire Ball for passengers, said Ohio's Director of Agriculture David Daniels. All of the rides at the fair are checked several times when they are being set up to ensure they are set up the way the manufacturer intended, he said.

Amusements of America provided rides for the North Carolina State Fair in the early 2000s.

A different company was involved in the Vortex accident at the fair grounds in 2013 that malfunctioned and hurled people off the ride, seriously injuring several of them.