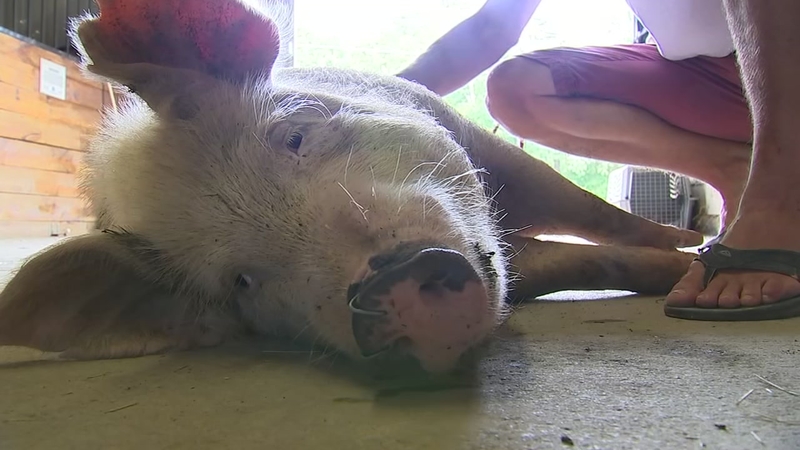 ROUGEMONT, N.C. (WTVD) -- Toby is getting a second chance at life and it's all thanks to Blind Spot Animals Sanctuary.

On June 19, animal control officers in Orange County received a call from Highway Patrol saying that a driver had reported a pig down on the highway.

When officers found Toby, he was on the side of I-40 - nearly lifeless.

He was suffering from heat exhaustion and was covered in dog bites, some cutting right to the bone, and parts of his ears had been torn off.

On July 5, owners of Blind Spot Animal Sanctuary, a sanctuary for unwanted pets and livestock, Alesja and Alex Daehnrich bought Toby for just $1 at a state-mandated auction for unwanted livestock - they were the only bidders.

Toby certainly wasn't their first rescue, and he wouldn't be their last.

The pair, both originally from Germany, runs the sanctuary in Rougemont.

They have been taking in homeless livestock for five years.

The Daehnrichs both have day jobs to help cover the sanctuary's costs.

And their work helps many animals in need.

Since coming into their care, Toby has been recovering well.

The Daehnrichs said he's already reached 500 pounds and they expect him to reach a whopping 800 pounds.

Since Toby is a large farm pig, he will stay at the sanctuary forever.

And for the Daehnrichs, they said their work, like saving Toby, is more rewarding than a vacation.

"Seeing that those animals are not euthanized and that they don't end up on somebody's plate, it's reward enough," Alex Daehnrich told the News & Observer.