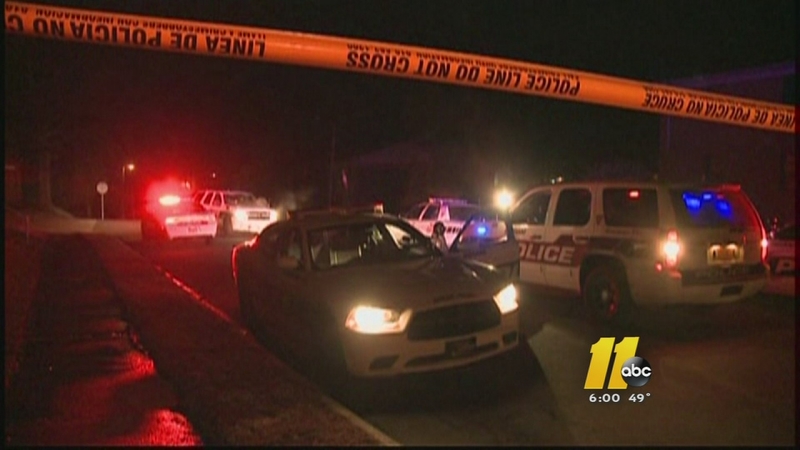 DURHAM (WTVD) -- Durham police say a man fired shots at one of their officers Thursday night.

It happened in the area of Lakeland Street and Truman Street around 10 p.m.

A department spokesperson said Officer J.T. West was sitting in his marked patrol car working on a report when he saw two suspicious men coming up from behind his car near an abandoned apartment building.

West got out of his car to speak to the men, but before he could say a word, one of them pulled a handgun from his waistband and fired six shots at the officer. One of the bullets struck the police vehicle.

West returned fire, getting off two shots as he ran for cover across the street. West dove behind a staircase in the abandoned apartment complex, injuring his wrist as he fell.

West called for backup, and a police dog was called in to track the two suspects. The track ended on South Alston Street with no sign of the men.

Police say they don't know if West's bullets hit the gunman or the man with him. Area hospitals have been put on alert.

Officer West was treated at the hospital for his injured wrist and released.

Joshua Lassiter works as a crossing guard at an elementary school nearby. He said he's frustrated with recent attacks on police.

"Whether you think you're in the right or not you still respect them because they got to do their job," he said. "It's getting critical. It needs to stop."

Anyone with information is asked to call Investigator G. Silla at (919) 560-4415, ext. 29310 or CrimeStoppers at (919) 683-1200. CrimeStoppers pays cash rewards for information leading to arrests in felony cases and callers never have to identify themselves.