Clinton thunders to big win over Sanders in South Carolina 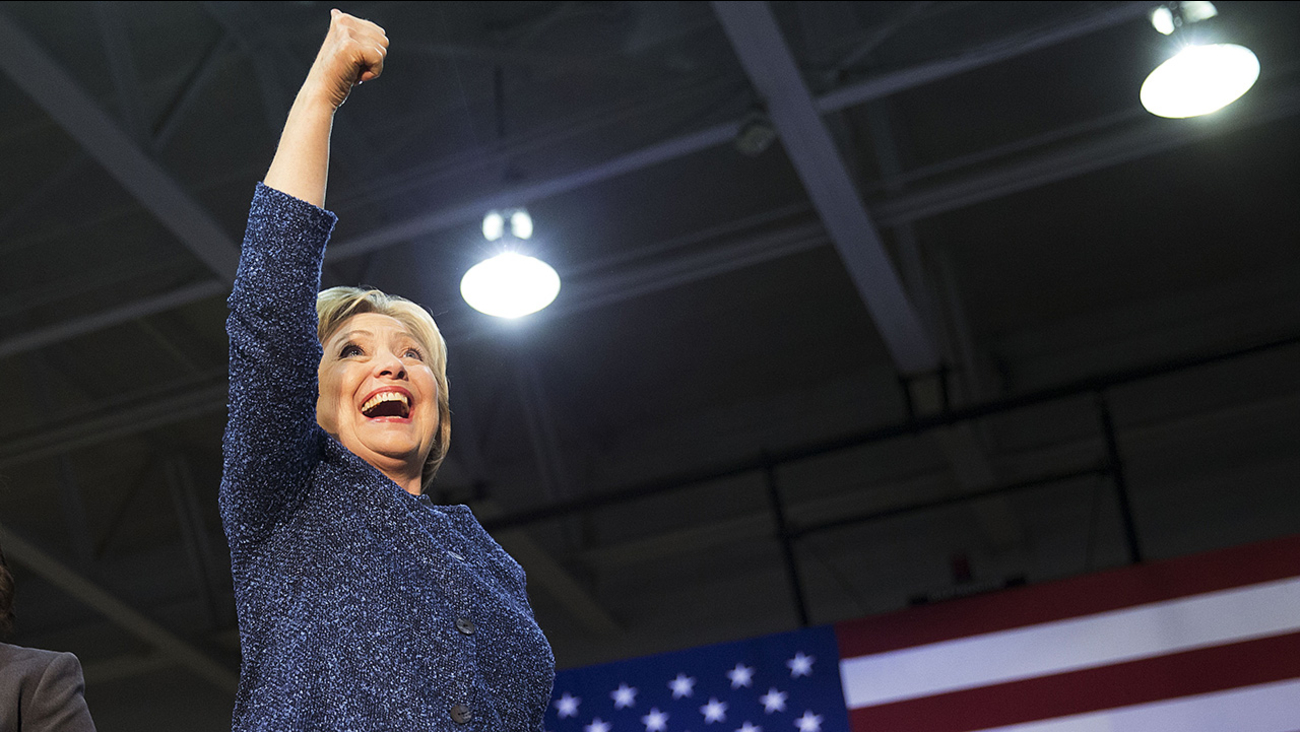 Democratic presidential candidate, Hillary Clinton gestures to the crowd as she takes the stage for a campaign event at Miles College Saturday, Feb. 27, 2016 (David Goldman)

Clinton's lopsided win - she led by almost 50 points with about three-fourths of the vote counted - provided an important boost for her campaign and a moment to wipe away bitter memories of her loss to Barack Obama in South Carolina eight years ago. She won the support of nearly 9 in 10 black voters, crucial Democratic backers who abandoned her for Obama in 2008.

During a raucous victory rally, Clinton briefly reveled in her sweeping support from South Carolina voters, hugging backers and posing with them for selfie photos. But then she pivoted quickly to the contests to come.

Sanders, expecting defeat, left the state even before voting was finished and turned his attention to states that vote in next Tuesday's delegate-rich contests.

Clinton's victory came at the end of a day that saw Republican candidates firing insults at each other from Super Tuesday states. Donald Trump, working to build an insurmountable lead, was campaigning in Arkansas with former rival Chris Christie and calling Marco Rubio a "light little nothing;" Ted Cruz was asking parents in Atlanta if they would be pleased if their children spouted profanities like the brash billionaire, and Rubio was mocking Trump as a "con artist" with "the worst spray tan in America."

Clinton allies quickly touted the breadth of her victory. Besides blacks, she won most women and voters aged 25 and older, according to early exit polls.

Sanders continued to do well with young voters, his most passionate supporters. He also carried those who identified themselves as independents. All registered voters could vote in either the Democratic or Republican primary but not in both.

A self-described democratic socialist, Sanders has energized his supporters with impassioned calls for breaking up Wall Street banks and making tuition free at public colleges and universities. But the senator from Vermont, a state where about 1 percent of the population is black, lacks Clinton's deep ties to the African-American community.

Still, he did invest heavily in South Carolina, with 200 paid staff on the ground and an aggressive television advertising campaign.

Exit polls showed 6 in 10 voters in the primary were black, by far the largest proportion in any of the contests so far. About 7 in 10 said they wanted the next president to continue Obama's policies, and only about 20 percent wanted a more liberal course of action, according to the polls conducted by Edison Research for The Associated Press and television networks.

Clinton's sweeping victory suggested South Carolina voters had put aside any lingering tensions from her heated 2008 contest with Obama. Former President Bill Clinton made statements during that campaign that were seen by some, including influential South Carolina Rep. James Clyburn, as questioning the legitimacy of the black presidential contender.

This time around, Clyburn endorsed Clinton, and her husband was well-received as he traveled the state on her behalf. She focused on issues with particular resonance in the black community and held an emotional event with black mothers whose children died in shootings.

Clinton's second White House bid lurched to an uneven start, with a narrow victory over Sanders in Iowa and a crushing loss to the senator in New Hampshire. She pulled off a 5-point win over Sanders in last week's Nevada caucus, a crucial victory that helped stem Sanders' momentum.

Taken together, 865 Democratic delegates are up for grabs in the Super Tuesday contests in 11 states and American Samoa. Sanders is hoping to stay close to Clinton in the South while focusing most of his attention on states in the Midwest and Northeast, including his home state of Vermont.

Sanders has built a massive network of small donors and has the money to stay in the race deep into the spring. Still, Clinton's campaign sees a chance to build enough of a delegate lead to put the race out of reach during the sprint through March.

Clinton's will pick up most of South Carolina's delegates, widening her overall lead in AP's count. With 53 delegates at stake, Clinton will receive at least 37, Sanders at least 12.

Going into South Carolina, Clinton had just a one-delegate edge over Sanders. However, she also has a massive lead among superdelegates, the Democratic Party leaders who can vote for the candidate of their choice at this summer's national convention, regardless of how their states vote.