State Board of Elections calls for new election in 9th district 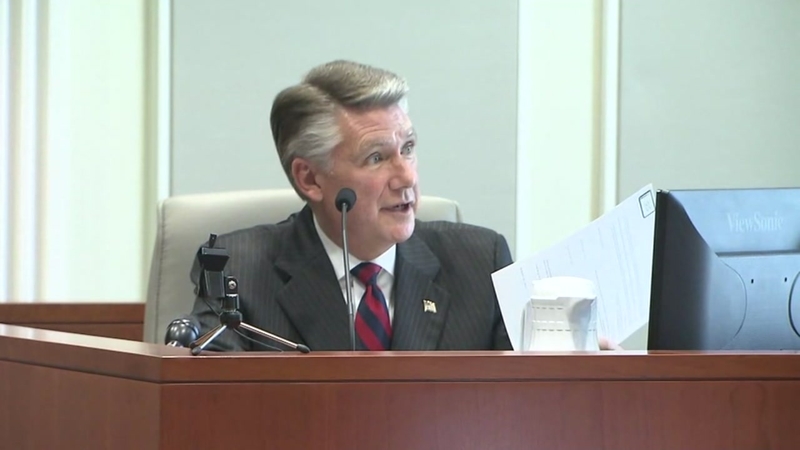 State Board of Elections calls for new election in 9th district

RALEIGH, N.C. -- After hours of testimony Thursday, Mark Harris told the North Carolina State Board of Elections that he supports a new election in the 9th Congressional District race.

Afterward, the North Carolina State Board of Elections voted 5-0 to call for a new election in the undecided US House race after hearing evidence it was tainted by ballot fraud

In moving to order a new election, board chairman Bob Cordle cited "the corruption, the absolute mess with the absentee ballots."

The State BOE will decide on a date for the new election at a later meeting.

Before the Board's vote, Board Member David C. Black said the staff's investigation should serve as a lesson that the State Board will do its best to ensure elections are run properly and fairly.

"As we stated before, this did not help the reputation of North Carolina, but we've turned the corner now," Black said.

The decision could leave the congressional seat empty for months, perhaps until the fall, board attorney Josh Lawson said. New primaries will be held in addition to a new general election, with the dates set by the elections board.

Harris left the hearing room without answering questions. It was not immediately clear whether he intends to run in a new election.

Democrats lauded the board's unanimous order for a new election.

"Over an extraordinary four-day hearing, investigators laid out point-by-point how Republican Mark Harris' campaign funded and directed an elaborate, illegal scheme to steal an election," said NC Democratic Party Chairman Wayne Goodwin. "North Carolina Republicans, following Mark Harris' lead, repeatedly lied to the people of the Ninth district, silenced their voices, and undermined our entire state's faith in our democracy. This saga could only have ended in a new election, and we look forward to repairing the harm dealt by Republicans and giving the people of the Ninth district the representative they deserve."

Dan McCready tweeted that the vote for the new election was a "great step forward for democracy in North Carolina," but did not say whether or not he will be running in the next election.

"I thank the Board for unanimously doing the right thing," Cooper said. "People must have confidence that their vote matters and this action sends a strong message that election fraud must not be tolerated."

Today I ask for everyone’s prayers for @MarkHarrisNC9 Today is a tremendously difficult day for his family, supporters and the entire @NCGOP We support our candidates decision in this matter. We will do everything we can to help the process and system improve in the future

Before the bombshell declaration, Harris said earlier Thursday that he met McCrae Dowless, who was hired by Red Dome, in April 2017 after friends told him he could help with the election in Bladen County.

Investigators said Harris' campaign paid the firm $130,000 between July and November of 2018.

State elections director, Kim Strach, said Dowless paid local people $125 for every 50 mail-in ballots they collected and turned in to him in Bladen and Robeson counties.

Harris claimed Dowless said, "we don't touch ballots and don't take ballots." He insisted that he understood Dowless' planned to solicit the absentee ballot request forms and follow up with voters to assist with information on the candidates.

He said Red Dome founder, Andy Yates, who ran the budget for the Harris campaign, never raised concerns about Dowless' use of funds or how he paid workers in the field.

Harris also lamented that no contract -- or written record -- was drawn up between the firm and Dowless.

John said he did, in fact, warn his father about McCrae Dowless.

In court, Harris' legal team turned over several last-minute documents to the court, despite what was ordered in the subpoena.

Meredith College political science professor David McClennan, who followed the hearing closely, told ABC11, "Once I started watching Dr. Harris testify today - things were going very badly. I mean it started yesterday, continued today. I don't think he was left with any other position to take (than to call for a new election)," he said. "This hearing has pointed out the problems in the absentee ballot process that we all knew were there. But, this is magnifying it a thousand fold."