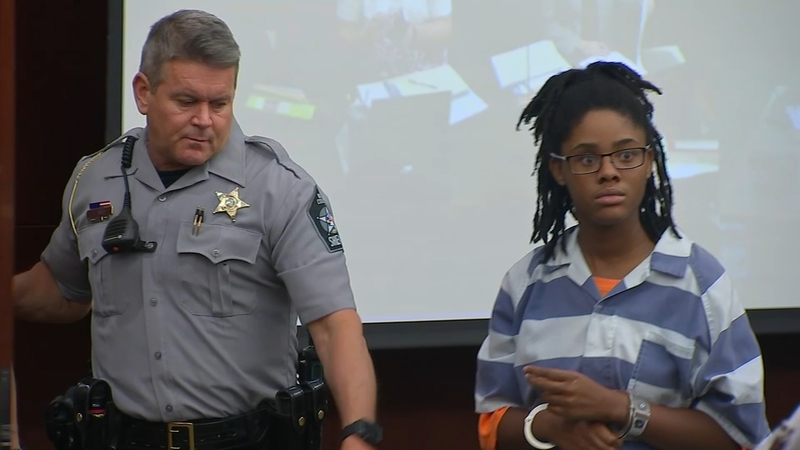 RALEIGH, N.C. (WTVD) -- A pregnant Raleigh mother says she was pinned down behind her car shielding her two young daughters from a hail of gunfire being volleyed at her by her cousin.

Jasmine Tuck says her cousin has been mad at her ever since Tuck's best friend had an affair with her cousin's boyfriend a year ago.

"I didn't think it would go this far. And the crazy thing is before this incident I saw her two days ago and she didn't say nothing to me," Tuck told ABC 11.

Two hours later, her 21-year-old cousin Peyton King was in a Wake County courtroom facing a judge for the first time on charges that included assault with a deadly weapon with intent to kill and two counts of assault on a child under 12.

When she walked in from the holding cell she glanced back at relatives in the courtroom, one of whom identified herself as King's sister.

Tuck says she was sitting on the back porch of her brother's home on Garner Road in downtown Raleigh on Wednesday as her four and five-year-old daughters played in the yard.

She says a car with her cousin and two men inside came up the driveway and the trio got out with guns and started firing.

She says she grabbed her girls and hunkered down behind her car.

She says her cousin was directing the assault, yelling at her, and barking orders at the two men.

"Couldn't believe my own cousin would try to kill me," she added saying at one point she was certain she would die.

"She had walked around the car and was like, 'There she goes.' And she like pointed the gun but it just like kept making a clicking noise. So I'm assuming all the bullets were gone or the gun jammed. And then that's when they ran back to the car."

Tuck called that stroke of luck a blessing.

Today a judge told King she could face more than five years in prison if convicted for shooting at her own cousins.