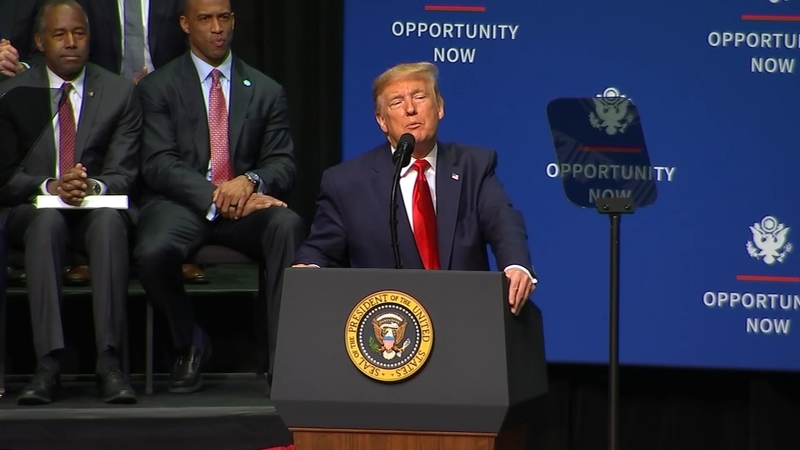 CHARLOTTE, N.C. (WTVD) -- President Donald Trump used his first trip outside Washington since his State of the Union address and the end of his impeachment trial to visit North Carolina and announce a new nationwide effort to revitalize underserved cities across the country.

The new effort will be called "Opportunity Now," Trump said at the North Carolina Opportunity Now summit in Charlotte. He called it "a big deal" that would involve community leaders, workers, entrepreneurs, employers and faith leaders.

The president also touched on his recent acquittal in the impeachment trial.

According to Moore's office, Opportunity Now is a federal tax incentive contained in the Tax Cuts and Jobs Act of 2017 that promotes long-term equity investments in low-income communities designated as qualified opportunity zones.

"I appreciate President Trump and our state's members of Congress for putting Opportunity Now in place, enacting successful economic reforms to complement its goals, and working to make the initiative a success in North Carolina and across the nation," Moore said.

RELATED | What you need to know about Opportunity Zones

"I'm proud to have supported the creation of Opportunity Zones across North Carolina, and I want to thank President Trump for speaking today at the Opportunity Now Summit in Charlotte," Tillis said. "All North Carolinians deserve their shot at realizing the American Dream, and Opportunity Zones are already making an impact by tackling poverty and investing in communities to promote development and economic prosperity."

On Friday, Trump campaign staffers cited several measures that have helped North Carolinians, including the First Step Act, which is designed to provide resources to help former inmates find jobs and assimilate into society, and the Tax Cuts and Jobs Act, which created "Opportunity Zones," designated areas where a tax credit is available to those who invest and help blighted communities.

RELATED | The fundamentals of Opportunity Zones

Trump’s done here is far different than a rally & he acknowledges this too; @POTUS @realDonaldTrump is using this Opportunity Summit as an opportunity to focus on economy & talk policy. Big focus as well on minorities & African American communities. @ABC11_WTVD @ABCPolitics pic.twitter.com/GPjuBc59cn

Trump's team noted that the unemployment rate in North Carolina has dropped to a historic low of 3.7 percent.

"North Carolinians finally have someone in the Oval Office who will fight for them," said Samantha Cotten, Trump Victory spokesperson. "President Trump has been a champion for criminal justice reform, combating poverty, and offering tax credits to reinvest in previously neglected neighborhoods."

The president previously hosted a 'Keep America Great' rally in Fayetteville in August.

Trump will return to Charlotte in late August for the Republican National Convention, where he is expected to claim his party's nomination for president.