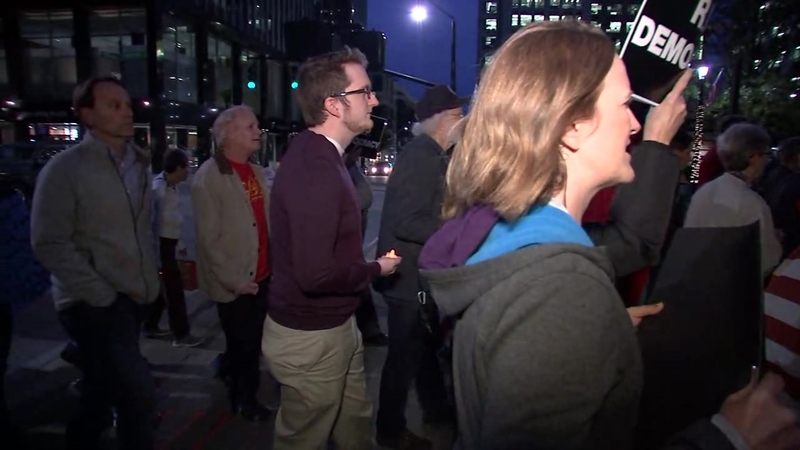 DURHAM, N.C. (WTVD) -- Hundreds are expected to attend rallies across the country and in the Triangle in protest of Attorney General Jeff Sessions' resignation. The group "Nobody is Above the Law" gathered near the bull in downtown Durham, and in downtown Raleigh by Bicentennial Plaza at 5 p.m. Thursday.

The group said it believes Sessions' resignation and President Donald Trump's replacement as attorney general are threats to democracy.

This week, Sessions, who recused himself from the Russia investigation, announced his resignation, stating it was at the request of President Trump.

Group chants “stand up fight back.” Here are their signs in protest of @realDonaldTrump appointment of Matt Whitaker to Attorney General, a critic of the Mueller special counsel Russia investigation. #Raleigh #ABC11 pic.twitter.com/roTrqFD0uU

A peaceful crowd gathering to protest @realDonaldTrump and his new attorney general pick Matt Whitaker. These folks believe the change in Justice Department leadership is a scheme to weaken the Russia Investigation. #ABC11 pic.twitter.com/ROry9wiCmj

Sessions' Chief of Staff Matt Whitaker was appointed by Trump to take his place. Whitaker will be the acting attorney general and will oversee the Russia investigation, taking over that role from deputy attorney general Rod Rosenstein.

The investigation is a probe by special counsel Robert Mueller into alleged Russian collusion during the 2016 presidential election.

In past TV appearances, Whitaker has been critical of the controversial investigation and has even suggested ways to diminish it.