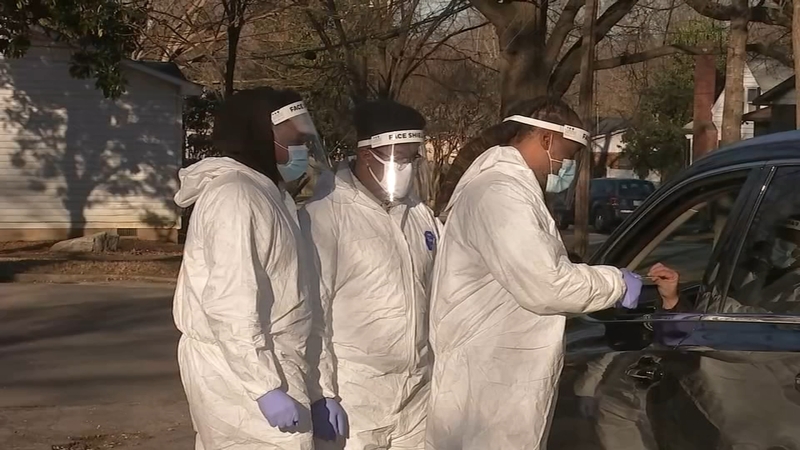 Raleigh brothers on verge of homelessness surprised with new home

RALEIGH (WTVD) -- Brothers Jordon and Levonte Adams got the surprise of a lifetime from Good Morning America on Friday.

The southeast Raleigh teens played an integral role at a nearby COVID-19 testing site after the 27610 zip code became one of the state's worst for the spread of the virus. The brothers helped process test samples six or seven days a week.

The family of seven had been living in a hotel after their parents were furloughed. But they were losing access to the hotel off Glenwood Avenue and facing homelessness.

Jordon and Levonte Adams were on the verge of homelessness and had to live in a hotel for nearly two years with their family.

Back in September, ABC11 first met the boys' mother, Amber McLee when she talked about her family's struggles.

"I have been walking this tight rope, teetering for the last two years," McLee said in September.

Even still, the brothers lifted themselves up as they continued to serve and inspire.

We’ll meet the Raleigh teens trying to raise awareness about the impact of COVID-19 in their hard hit SE Raleigh zip code. They’re working hard at this no-cost test site in their neighborhood to help the community. #abc11
TONIGHT AT 11 pic.twitter.com/oiBGizoz4n

"But to see the energy and the work ethic that they have is just amazing." Diana Powell, founder of Justice Served NC, told GMA. "They want to be able to still give back and serve their community. I think that is a beautiful thing."

Behind the face masks and face shields at a southeast Raleigh COVID-19 testing site are teens who are willing to help raise awareness within their community.

So as a thank you, Vero Diagnostics and the community teamed up to give the family a fully-furnished house. All house-related expenses are paid for a year. When Pinnacle Financial Partners heard about the story -- the executives decided to boost the boys' savings accounts with $1000 deposit match. And, Triangle-based non-profit The Green Chair Project was also there with a pledge to fully furnish the home.

The boys, their family and several friends gathered together to hear the news announced to them on live TV.

"I had no idea that they were so resilient," said McLee, the boys' mother, on GMA. "I appreciate their strength and they're really good boys. I'm very fortunate to have children like them."

McLee added that she's relieved to be able to sit at a table and have dinner with her family.

Jordon Adams said he wants to continue the momentum gained from volunteering and be a doctor when he grows up. Levonte wants to work in science.