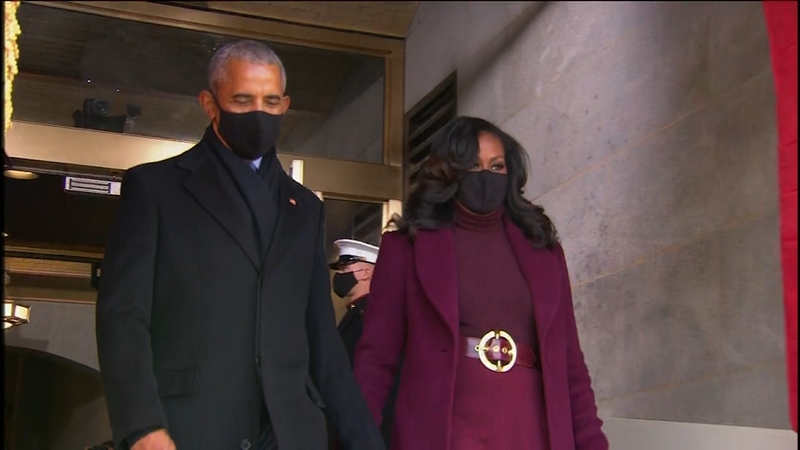 WASHINGTON -- As President Joe Biden prepared for his inauguration Wednesday, supporters across the country celebrated and wished the president and Vice President Kamala Harris the best.

Biden's oath of office Wednesday to become the 46th President of the United States puts him at the helm of a deeply divided nation where he inherits a confluence of crisis that are arguably greater than any faced by his predecessors.

Ahead of and throughout the ceremony, politicians, celebrities and athletes took to social media to offer their support.

Former President Barack Obama tweeted in support of his former vice president saying, "Congratulations to my friend, President @JoeBiden! This is your time."

He included a photo of the pair hugging in the White House.

Congratulations to my friend, President @JoeBiden! This is your time. pic.twitter.com/LXzxGnBAfz

Former presidents Clinton, Bush and Obama gathered together during the 'Celebrating America' special and spoke of the importance of a peaceful transfer of power.

Former First Lady and Secretary of State Hillary Clinton tweeted in support of Harris, "It delights me to think that what feels historical and amazing to us today-a woman sworn in to the vice presidency-will seem normal, obvious, "of course" to Kamala's grand-nieces as they grow up. And they will be right."

It delights me to think that what feels historical and amazing to us today—a woman sworn in to the vice presidency—will seem normal, obvious, "of course" to Kamala's grand-nieces as they grow up. And they will be right. pic.twitter.com/1gQOvmNipB

She also offered words of encouragement to the president and First Lady Dr. Jill Biden, tweeting, "So excited to call these two wonderful people "Mr. President" and "Dr. Biden."

Biden himself also offered supportive words toward his wife, tweeting "I love you, Jilly, and I couldn't be more grateful to have you with me on the journey ahead."

I love you, Jilly, and I couldn’t be more grateful to have you with me on the journey ahead. pic.twitter.com/V4GUXAKSKg

Global leaders also chimed in to offer their congratulations.

Prime Minister of the United Kingdom Boris Johnson tweeted, "Congratulations to @JoeBiden on being sworn in as President of the United States and to @KamalaHarris on her historic inauguration. America's leadership is vital on the issues that matter to us all, from climate change to COVID, and I look forward to working with President Biden."

Congratulations to @JoeBiden on being sworn in as President of the United States and to @KamalaHarris on her historic inauguration. America’s leadership is vital on the issues that matter to us all, from climate change to COVID, and I look forward to working with President Biden.

First Minister of Scotland Nicola Sturgeon offered a series of tweets in support of Biden and Harris, saying "Warm congratulations and best wishes to President Biden and Vice President Harris. Scotland and the USA share long-standing bonds of friendship and co-operation. We look forward to building on these in the years ahead."

Warm congratulations and best wishes to President Biden and Vice President Harris. Scotland and the USA share long-standing bonds of friendship and co-operation. We look forward to building on these in the years ahead #InaugurationDay 🇺🇸🏴󠁧󠁢󠁳󠁣󠁴󠁿

My warmest congratulations to @JoeBiden on his assumption of office as President of the United States of America. I look forward to working with him to strengthen India-US strategic partnership.

"Canada and the United States enjoy one of the most unique relationships in the world, built on a shared commitment to democratic values, common interests, and strong economic and security ties," he said. "Our two countries are more than neighbours -- we are close friends, partners, and allies.

"Canada and the United States have worked side-by-side to tackle some of the greatest challenges we have faced in our history," Trudeau also said.

He also tweeted his congratulations to the new president as well as Vice President Kamala Harris.

Congratulations, @JoeBiden, on your inauguration as the 46th President of the United States. Our two countries have tackled some of history’s greatest challenges together - and I’m looking forward to continuing this partnership with you, @KamalaHarris, and your administration.

During his daily briefing, López Obrador outlined three themes as key areas of the bilateral relationship with the US. "Those three themes are very important: pandemic, economic recovery and migration," he said.

López Obrador also said Biden should take steps to settle the immigration status of Mexicans working in the US.

"On the occasion of your inauguration as the forty-sixth President of the United States of America, I extend cordial good wishes and the assurance of my prayers that Almighty God will grant you wisdom and strength in the exercise of your high office," the message says.

"Under your leadership, may the American people continue to draw strength from the lofty political, ethical and religious values that have inspired the nation since its founding.

"At a time when the grave crises facing our human family call for farsighted and united responses, I pray that your decisions will be guided by a concern for building a society marked by authentic justice and freedom, together with unfailing respect for the rights and dignity of every person, especially the poor, the vulnerable and those who have no voice," the Pope wrote.

Israeli Prime Minister Benjamin Netanyahu congratulated the incoming administration while also reminding them he sees Iran as their top challenge to confront.

"President Biden, you and I have had a warm personal friendship going back many decades. I look forward to working with you to further strengthen the US-Israel alliance, to continue expanding peace between Israel and the Arab world and to confront common challenges, chief among them the threat posed by Iran," Netanyahu said in a video statement.

"U.S. leadership remains essential as we work together to protect our democracies, our values and the rules-based international order," he said.

"NATO Allies need to stand together to address the security consequences of the rise of China, the threat of terrorism, including in Afghanistan and Iraq, and a more assertive Russia."

"From the wreckage there will be renewal," tweeted actor Mark Ruffalo.

"We are going to be okay," he assured in his profound statement:

We are going to be okay. From the wreckage there will be renewal, from the wounds will grow compassion and character, from the division will come clarity, from the despair will come wisdom, from the loss will come community.

"So happy we made it to today," he said.

It’s been a long four years. Very Long. Finally, hope is on the way. So happy we made it to today. @JoeBiden @KamalaHarris @JustinMikita pic.twitter.com/6NhxEBpeMv

A poetic Bono posted a lengthy, heartfelt message of what America means to him "as an Irishman," and spoke of the changing tides he foresees with this transtition of power.

"Lady Liberty's been bruised and battered these past four years, but today her flame burns bright as we watch her torch transfer to two new leaders who will calm the waters, even while they chart a new course," the U2 singer wrote on Twitter.

Bono: "As an Irishman, I’ve always believed America isn’t just a country, it’s an idea, one the whole world has a stake in. Lady Liberty’s been bruised and battered these past four years...

A cheeky Chrissy Teigen, as per usual, hopes to get a Twitter follow from Biden after being blocked by Donald Trump for years.

Comedian Leslie Jones documented an animated minute-by-minute log of the ceremony, including this video of Kamala Harris being sworn in as vice president.

The caption speaks for itself in terms of her level of excitement:

Actress and ABC's "Scandal" star Kerry Washington says there is still "sooooo much work today," but she is celebrating this historic day with prayer and revelation.

Sooooo much work to do. But TODAY I want to celebrate. And pray. And revel in our tremendous power (even against all odds) to make history happen.

For Golden State Warriors star Stephen Curry, it was an inspiring morning to share with his three young children.

Talk about a moment for my kids to see! How y’all doing this morning???? #MadamVicePresidentKamalaHarris #wediditJoe pic.twitter.com/cwBrG3MWps

The U.S. and global soccer star says while she's "feeling good... Let us not waste this opportunity to reckon with our past, and move forward justice and equality."

Let us not waste this opportunity to reckon with our past, and move forward justice and equality.

This inauguration feels like Simba coming back to reclaim Pride Land after Scar and the Hyenas took over. God bless America...

Of course, the former Yankee and Major League baseball star attended Inauguration Day in support of Biden and Harris, but also in support of his wife Jennifer Lopez, who performed at the ceremony.

CNN Wire contributed to this report