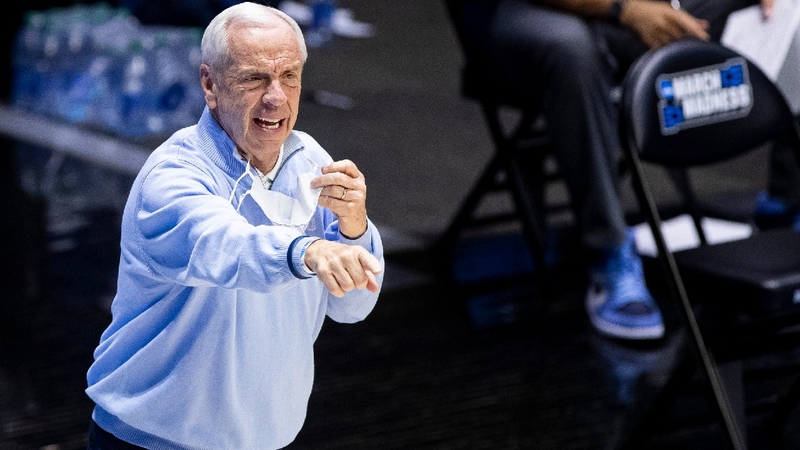 CHAPEL HILL, N.C. (WTVD) -- Saying he no longer felt he was "the right man for the job," UNC men's basketball coach Roy Williams announced his retirement after 33 seasons as a head coach in the NCAA.

Williams led the Tar Heels to three national championships. He finishes his career, at age 70, as the third-winningest coach in Division 1 history.

During a long, thoughtful news conference on the Smith Center court bearing his name, Williams described himself as a coach who was bothered by losses and by his own mistakes during the past two difficult seasons. One of those saw the only losing record of his career and the other, this season, saw Williams coaching a young group playing amid the COVID-19 pandemic.

"It's been a thrill, it's been unbelievable," an emotional Williams said Thursday afternoon.

WATCH: Roy Williams: 'I no longer feel that I am the right man for the job'
EMBED More News Videos

Sport apparel shops along Franklin Street saw sales rise in the wake of Thursday's announcement about the long-time coach's retirement.

At the news conference, UNC Chancellor Kevin Guskiewicz said, "I wish we could use our last timeout and stop the clock. Nobody has loved this university like Roy Williams".

Williams said he "made mistakes" in recent years and said he is "very comfortable" with his decision to retire.

"There's no question that I am old-school," Williams said. He said the transfer portal and recent player departures from the program gave him pause but were not a deciding factor in his decision.

Williams had thrived with lessons rooted in his time under Dean Smith even as he forged his own style. Williams always pushed for more and typically he got it. His teams played fast, with Williams frantically waving his arms for them to push the ball. They attacked the boards with his preferred two-post style. He stubbornly hoarded timeouts, saying his team should be prepared for most situations through practice.

His competitive drive is fierce and only slightly obscured by his folksy sayings and charm from his time growing up in the North Carolina mountains. And by the end, he won more national championships than Smith's two.

"I could never come close to matching what Coach Smith did," Williams said. "But every day, I tried to make him proud."

In his final home game as head coach of the Tar Heels, Williams' team beat rival Duke 91-73 -- cementing his record in the Smith Center at 241 wins and just 40 losses.

After that game, Williams went to midcourt and kissed the UNC logo there. A lot was made of that gesture, as it reminded UNC fans of Antawn Jamison kissing the floor at the 1998 Final Four before announcing that he was leaving school for the NBA.

After the game, Williams was asked if his kissing the floor meant he was retiring. He vehemently denied those insinuations.

"I knew it was the last game this season in the Smith Center, and that's all it was. That's all it was," Williams said, while explaining that there were many times in his life he'd wished he had kissed the floor after big games.

"In my estimation, there is no way he entered this season with any plans to retire," ABC11 Sports Director Mark Armstrong said. "It wouldn't surprise me, when we hear from Roy later today at 4 o'clock, that this decision maybe was made in even the last seven days--where something just tipped the scales and he just decided now was the time to walk away."

Fans were shocked when UNC announced the head coach's retirement on Thursday.

Williams said he doesn't know what the future holds but said he knows he won't coach again.

Williams' final season at UNC, ended ingloriously, with the Tar Heels suffering an 85-62 drubbing at the hands of Wisconsin in the opening round of the NCAA tournament. It was Williams' only loss in the 30 first-round tournament games be coached.

"It's been a difficult year, but everybody's had the problems with COVID that we've had," an emotional Williams said after that loss. "It's been a hard year to push and pull, push and pull every other day to try to get something done. But how can you be any luckier than Roy Williams is coaching basketball?"

He elaborated on that final more in Thursday's news conference.

"So discouraged after the Wisconsin game the way I'd gotten our guys ready to play, and I think I sort of knew after that game, and so the last 13 nights I basically stayed awake all night to make sure," Williams said. "Wasn't much sleeping or anything."

The loss, however, did little to tarnish one of college basketball's most accomplished stories.
dean
EMBED More News Videos

The North Carolina native was an all-conference basketball player in high school. He went to the University of North Carolina and played on the freshman team. There he began studying the game under hall of famer Smith.

Williams' time as an assistant included the Tar Heels' run to the 1982 NCAA championship for Smith's first title, a game that memorably featured a freshman Michael Jordan making the go-ahead jumper that would prove to be the winning basket after Georgetown made an inexplicable turnover late in the game.

"Roy Williams is and always will be a Carolina basketball legend," Jordan said in a statement through his business manager. "His great success on the court is truly matched by the impact he had on the lives of the players he coached - including me. I'm proud of the way he carried on the tradition of Coach Smith's program, always putting his players first."

Williams left UNC to take the head coaching job at the University of Kansas.

Williams was wildly successful at Kansas. He won more than 400 games and had a winning percentage above .800. The national championship, however, eluded him in Lawrence. Then in 2003, his alma mater came calling for a second time. Williams had opted to stay in Kansas in 2000 when Bill Guthridge retired, but when UNC showed up again three years later, Williams could not say no.

He succeeded Matt Doherty, another former Tar Heel player turned coach who had a tumultuous era in Chapel Hill that included an 8-20 season.

In his second year at UNC (2004-2005), Williams won his first NCAA national championship as a head coach.

He would go on to win another 483 games at UNC--making him the only coach in history to win more than 400 games at two different schools. He finishes his career with 903 wins; he got to 900 wins in fewer games (1,161) and seasons (33) than any other coach in history.

"On behalf of the ACC, we extend a heartfelt congratulations to Roy Williams on a remarkable career," commissioner Jim Phillips said in a statement. "His resume of accomplishments speaks for itself. More importantly, the countless lives he positively affected surpasses all of the individual honors and awards. Roy's fingerprints will forever be on the sport of college basketball, and specifically the Atlantic Coast Conference. We wish him, Wanda and his entire family all the best as he begins this next chapter of an amazing life."

Williams also would go on win two more NCAA titles (2008-09 & 2016-17), get elected into the Naismith Hall of Fame, and have the court in the Dean E. Smith Center named in his honor. Williams also won three ACC titles.

From 2003 to 2021, no team had more NCAA tournament game wins (45), Final Four appearances (5) or national championships (3) than the Roy Williams led Tar Heels.

Williams had just one losing season - an injury-plagued 14-19 year in 2019-20 - and otherwise missed the NCAA tournament only in his first season at Kansas when he inherited a program on probation and in 2010 with a UNC team that reached the NIT final.

"Roy Williams has been an icon in our industry for the last 33 years, and his retirement is very well deserved," current Kansas coach Bill Self said in a statement. "Roy won at the highest level and projected first-class while doing so. To have the opportunity to follow him here at the University of Kansas and see firsthand the type of program he ran was an honor of a lifetime. Congratulations to him on a Hall of Fame career and for the lasting impact he has had on our sport."

Since taking over in Chapel Hill, Williams has had 21 players drafted in the first round of the NBA draft -- the third-highest total by any college coach in that span, trailing only Kentucky's John Calipari (35) and Duke's Mike Krzyzewski (24).

"I love coaching, working the kids on the court, the locker room, the trips, the 'Jump Around' (pregame) music, the trying to build a team," Williams said. "I will always love that. And I'm scared to death of the next phase. But I no longer feel that I'm the right man."

When the news conference ended, the grandfather of four walked to his wife, Wanda, took her hand, and the two walked out together.

Last thing Roy Williams did before driving out of the Smith Center parking lot right at 6 p.m.: sign autographs and pose for pictures with fans who were waiting outside. pic.twitter.com/AVpsy5G1Mt