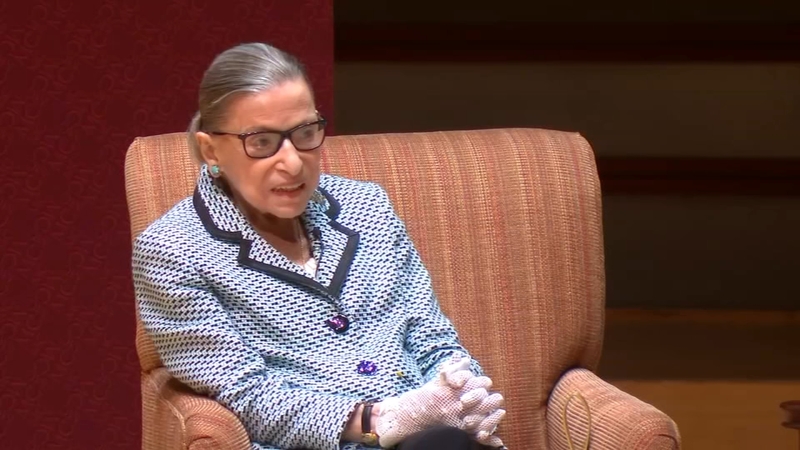 RALEIGH, N.C. (WTVD) -- When the second woman in U.S. history to serve on the nation's highest court stepped on the stage at Duke Energy Center's Meymandi Hall, all 1,700 seats flipped up. A standing ovation for the woman who literally changed the course of history for women in America.

It was a reaction Justice Ruth Bader Ginsburg has seen before.

Monday night, she responded with a joke she's told in variation on many occasions: "What is the difference between a bookkeeper in New York's Garment District, which my mother was, and a Supreme Court justice? And my answer is, one generation," she said to more applause.

The generations that benefited from Ginsburg's battles against sex discrimination lined up around the performing arts center, Monday, to see Ginsburg in the flesh. Many of them were Meredith College undergraduate students, born several years after Ginsburg was appointed to the Supreme Court. But know the legend.

"She is just an independent woman that I strive to be, not relying on anyone. Taking names and kicking butt," said Meredith first year student Sarah Nelson.

Meredith junior Neali Helms adding, "It was really hard to open doors that were already shut, hard to go law school. And knowing the opportunity that we have now to do what she's done and potentially even more. It's amazing."

Justice Ginsburg has achieved almost rock star status in recent years thanks to the motion picture "On the Basis of Sex" and documentary RBG, documenting her legal career on the front lines of gender equality and women's rights -- arguing six cases in front of the Supreme Court all while her late husband Marty Ginsburg, a feminist in his own right, served as her biggest supporter.

"(Marty) was the first man who cared I had a brain," Ginsburg joked in the public question and answer leading up to Meredith awarding her with its Woman of Achievement Award.

That was hardly the only laugh, Ginsburg provided in Raleigh despite her recent health troubles. A malignant tumor in her pancreas was successfully treated over the summer. It was her fourth cancer scare since 1999.

As the senior member of the high court's 4-member liberal wing -- her health remains a topic of concern.

Ginsburg said while her mind remains strong, her days of running on two hours of sleep are no more.

Those white collars that Justice Ginsburg wears on the bench have become part of her identity and everyone left with a RBG collar button as a souvenir.