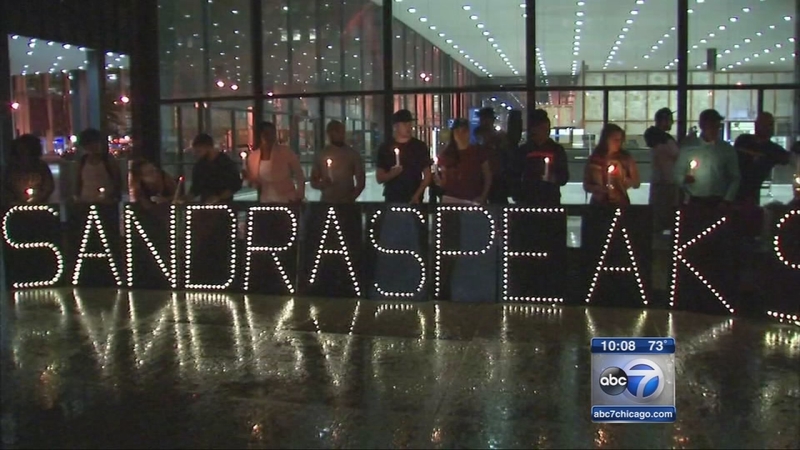 CHICAGO -- Friends and family of Sandra Bland gathered Wednesday night to mark one year since her death.

Bland died a year ago Wednesday after a Texas state trooper pulled her over three days earlier.

She was taken to the Waller County jail in Hempstead, Texas, where she was found hanging from a cell partition. Bland had been moving to Texas from the Chicago area.

A medical examiner ruled it a suicide, but her family still disagrees. Dashcam video of her arrest and the circumstances of her death provoked national outrage.

A vigil was held at Chicago's Federal Plaza to mark the anniversary of her death. It was hosted by the group Women's All Points Bulletin, which supports female victims of police violence, and Black Lives Matter Chicago. One of Bland's sisters, Shante Needham, introduced the vigil, which included prayer, poetry readings and a gospel music performance.

Needham said she visited her sister's grave earlier in the day, spending time there reflecting before making dinner and joining the group to remember Sandra.

"Today is a day of healing and remembering my sister," Needham said. "The protests are great but it's not always about protesting so we are going to remember her today."

Bland's mother, Geneva Reed-Veal, is scheduled to speak at the church Aug. 13 and the church plans a trip to Prairie View, Texas, Nov. 9-12. There church members plan a peaceful prayer meeting outside the jail where Bland died. They also plan to tour Prairie View A&M University, Bland's alma mater, and celebrate services with Hope AME Church in Prairie View, which has hosted rallies and prayer gatherings in Bland's memory.

DuPage AME Church also plans its Sandra A. Bland Diversity Institute on Martin Luther King Jr. Day in January. The Rev. James Miller, pastor of the church, said the ceremonies are designed to comfort Bland's family and congregants who knew her.

The anniversary comes the week after five Dallas police officers were killed by a sniper during a protest over recent killings of black men by police. Miller said it's clear from the current landscape in the U.S. that social inequities exist.

"The African-American community cannot be the only ones talking about civil rights and equity," Miller said. "It's when white people start talking about it that real action can take place."

Another vigil for Bland was held Wednesday evening in Austin, Texas.