Does the Triangle have enough school resource officers and are they effective? 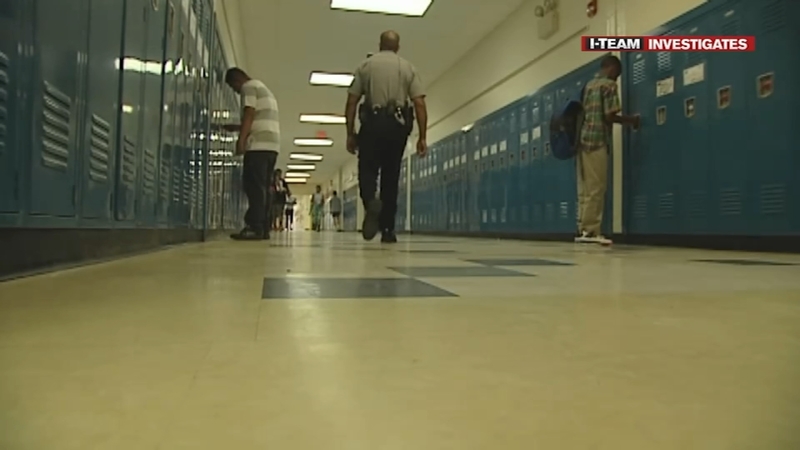 Does the Triangle have enough school resource officers?

RALEIGH, N.C. (WTVD) -- The mass shooting at the Uvalde elementary school has sparked national discussions on how to best protect students from increasing gun violence.

Over the last decade, there have been 27 mass shootings at schools, with 70% of them taking place at elementary schools, according to data from the Gun Violence Archive.

Many of the conversations following shootings at schools include adding and funding school resource officers as one of the solutions.

The ABC11 I-Team found all of the local school districts surveyed do employ school resource officers but many do not have full-time officers in elementary schools.

School districts in Lee and Franklin County have an officer within every school, including at the elementary level. Meanwhile, the Chapel-Hill, Carrboro City School District has no officers in elementary schools.

Wake County currently has 75 officers covering about 38% of its schools. Officers are in every middle and high school.

The district said it does not budget any money for the officers as they are all employed by 11 local law enforcement agencies. However, these positions do come at a cost for other districts.

In Franklin County, the district reported spending more than $800,000 a year to place officers in every school. The district increased officers in 2018 after receiving a grant. Other districts reported allocating anywhere from $271,000 to $536,000 annually.

Bryan Proffitt worked for years as a high school teacher within the Triangle and is now the vice president of the North Carolina Association of Educators.

He understands the real fears and thoughts educators and students have each time news of another mass shooting at a school is announced.

"I also know that, that extra level of responsibility that educators feel every time we hear something like this because it's like what are we going to do? What am I going to do if this happens?" Proffitt said.

However, he said he doesn't know if adding more SROS is the way to ease those concerns.

"The reality is unless we're prepared to put like a military barracks at every single school. If we keep letting anyone who wants to get an assault rifle, there's very little that we're going to be able to do," Proffitt said.

He pointed to the numerous national shootings that have had an officer on campus, but the individuals have been outnumbered.

Multiple studies suggest that the presence of officers doesn't necessarily make a difference during a mass shooting.

Researchers at Hamline University and Metropolitan State University in Minnesota conducted a JAMA Network study in 2021 that reviewed incidents surrounding mass shootings in schools between 1980 and 2019.

The study concluded, "armed guards were not associated with a significant reduction in rates of injuries; in fact, controlling for the aforementioned factors of location and school characteristics, the rate of deaths was 2.83 times greater in schools with an armed guard present."

Another 2021 study by RAND and the University at Albany found, "SROs do effectively reduce some forms of violence in schools, but do not prevent school shootings or gun-related incidents."

The study also found the presence of officers intensifies suspensions, police referrals and arrests of students, an impact that disproportionality impacts Black students.

This issue was a driving factor behind many advocates' calls in 2020 for districts to fund counselors over cops.

"Our idea is coming together with the community and actually making a job or people in the community who care about students who care about our wellbeing and want to get to know us and it's not a matter of that they have a gun or a Taser on them, but they're trained to deescalate situations and also get to build relationships with the students in schools," explained Victoria Smith, a college sophomore and former Wake County Public Schools student.

Smith founded the Wake County Black Student Coalition in 2020. The group aims to end systematic racism in the communities and schools while giving a voice to students.

"I never felt safe. I never felt truly safe as a like Black, queer female student. It was never, you know, they say words protect and serve. But it was always asking like, you know, 'What am I doing? Where am I going?' Never wanted to get to truly know you as an individual," she recalled.

Vicki Brent also serves on the executive board for the coalition and said students' experience with SROS varied based on which school they attended. For Brent, she said the issue of mass shootings at schools goes beyond the discussion of SROS.

"The problem isn't at this point whether or not there should be more cops or less cops. That is what the problem is, is that the people are able to access guns at such a high rate, that this is just a continuing cycle," Brent said.

These concerns over SROS were some of the motives behind the Chapel Hill-Carrboro City School district's decision to develop a task force to look into its program.

The district surveyed parents, staff and students to find more than 80% found SROS to "treat people of all races and ethnicities, and students with special needs well, and that SROs contribute to the safety of the school."

Chief Blue, whose office oversees the officers in the schools, said he believes that having an officer in a school would give responders an advantage during a mass shooting.

"There is no question in my mind that having an officer who was well acquainted with the floor plans and the comings and goings of staff, and students and kind of the ebbs and flows of activity in the buildings all of those things can be invaluable when it comes time to respond to a critical incident," Blue said.

He also acknowledged the criticism officers' presence in schools has received in the past. He said districts need to have protocols in place to define the roles of officers in schools.

"There's no reason for a police officer to have any role in some minor class cutting disciplinary kind of proceeding. But absent of some kind of document that spells that out very clearly. Those roles can creep into places they ought not to creep," Blue said.

Blue said it is hard to quantify the overall impact officers have on students and the school environment.

"The overwhelming bulk of the SRO's activities just consist of being visible, being present. Helping students and staff solve little mundane problems, sometimes being in an ear or a mentor and giving a high five here and there, that kind of thing. Most of your time is spent relationship building, honestly," he said.

The district's school board is expected to vote on continuing its program next week. A spokesperson for the district said the discussion is more centered on, "What does school safety look like moving forward, and what would be the role of police as part of an overall approach to physical safety and social/emotional wellbeing?"

"Part of how we prevent violence is by taking care of all of our kids right now. Not just protecting them from someone who's already hurting," he said. "We need to help them learn how to not hurt someone else right now."

To do this, he and others suggest that districts and the community dedicate more resources to mental health resources.

"That's how we prevent violence. Right? Not waiting until somebody's already hurt, already broken trying to figure out how to take a gun away from them. Let's just have healthier people and our schools are the place we can do that; our public schools are the places where we can build healthy young people," Proffitt said.

As the conversations about the best investment towards safety continue in communities across the nation, stakeholders hope leaders listen.

"I want them to listen to the young people in their buildings, and what their young people need. And I want them to listen to the parents and educators who work in the building and what it is they need, because we're there every day and we see where the holes are. We see where the solutions are," Proffitt said.
Report a correction or typo
Related topics:
politicsncchapel hillraleighschool resourcesiteami teampolice officer
Copyright © 2022 WTVD-TV. All Rights Reserved.
TOP STORIES
Local law students react to swearing in of Ketanji Brown Jackson
Homeownership becoming more expensive in the Triangle
RDU gears up for busy July 4th holiday passengers
Governor Cooper signs bill that keeps hemp industry lawful
Raleigh woman named in long lost Emmett Till case warrant
Misdiagnosed 'miracle baby' improving thanks to last-minute treatment
Wake First Responders, Officers, Volunteers honored with CIT awards
Show More
FBI raids Fayetteville church accused of operating as a cult
Durham's East End Connector opens after construction delays
Cruise ship hits iceberg in Alaska, returns to Seattle for repairs
ABC11 to present Raleigh's July 4th fireworks show at Dix Park
Jackson sworn in as 1st Black woman to sit on Supreme Court
More TOP STORIES News