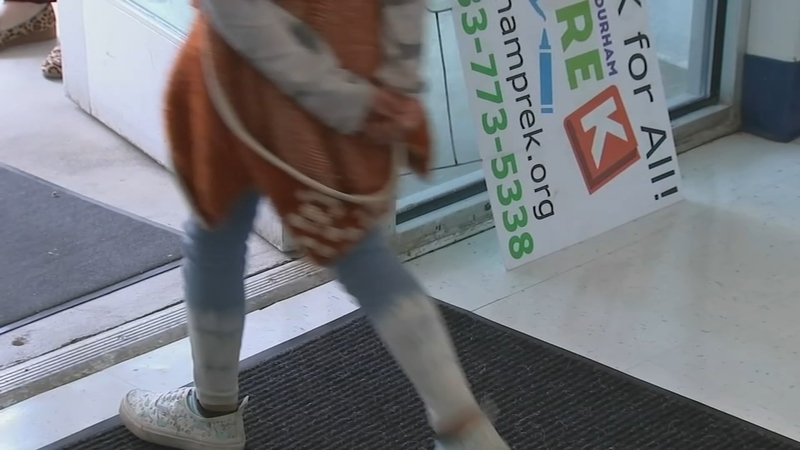 "My children were the first generation to grow up and watch the Columbine (school shooting) and they had to deal with that. And now my grandson is growing up in even a more violent world," said one woman Tuesday afternoon, who also pushed for stricter background checks.

"It was hard. I couldn't imagine getting that phone call getting my child was in that predicament. I probably would have lost my mind," said Britney Miles.

Miles supports more police at schools, as well as limitations on who can access weapons.

"I don't think anyone under the age of 21 should be able to purchase a gun," Miles said.

While there is a federal ban for people younger than 21 from buying a handgun from a licensed dealer, in most states, including North Carolina, a person only needs to be 18 to purchase a long gun.

"I think the elephant in the room is the types of weapons that are available, how easy they are to access," said Wesley McMahon, a parent and volunteer with North Carolinians Against Gun Violence.

Following the shooting in Uvalde, Texas, he said he believes there is stronger support for concrete measures to address gun violence.

"We're talking about preventing these tragedies from happening. And a key part of the prevention is making the guns less available to people who shouldn't have them," McMahon said.

"There are many school systems in my district that already have a school resource officer on every campus, so they might need that money for securing one entrance and having bulletproof glass, having secure doors. It might be metal detectors. It could be anything the school system determines they need," said Hudson.

Outside of funding, it would also provide local districts access to federal resources for feedback.

"We also ask the Department of Homeland Security to provide assessments for any school that wants one on their security and their mental health services," Hudson said.

What is not included in the legislation are steps to address gun control, which Hudson does not believe would reduce mass shootings at schools.

"In some of these school shootings, the gun was stolen. In Columbine, it was bought by someone else in a straw purchase for the individuals. Criminals find ways to get their hands on guns. And when you look at this issue of the age limit, historically in America, young people have always been able to buy guns, but you look in the 50s, 60s, 70s, we didn't have these mass school shootings. So I think the ability of a 19, 20-year-old to buy a long gun is not the reason we're having school shootings," said Hudson.

McMahon said he believes it's possible to balance gun rights and responsible regulation, though there must be a focus on being able to obtain weapons.

"We can have as much school security as we needed, but that still doesn't prevent someone from accessing this gun in the community," said McMahon.